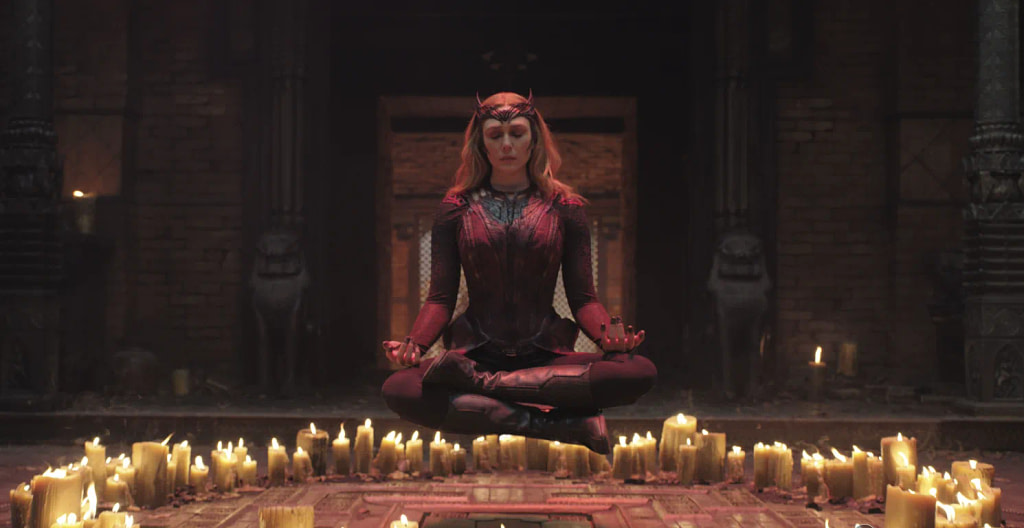 Doctor Strange and the Multiverse of Madness felt far more like a product I was being sold than an actual movie. This just isn't cinema. Photo Courtesy of Marvel Studios.

Film Review: Doctor Strange in the Multiverse of Madness

Doctor Strange in the Multiverse of Madness
Director: Sam Raimi

Marvel movies, to me, are like having a regular pizza day. I really love my pizza, but there’s always another one coming sooner rather than later, so I don’t spend any time gleefully anticipating when I get to have pizza again. Doctor Strange and the Multiverse of Madness was a break from the norm for me, but only in the sense that this pizza had way too many toppings, they weren’t fresh and the delivery driver carried on a slant so that the cheese all slid over to one side.

Doctor Strange in the Multiverse of Madness picks up a few months after Spider-Man: No Way Home left off, with Doctor Stephen Strange (Benedict Cumberbatch) attending the wedding of his ex-girlfriend, Christine Palmer (Rachel McAdams), when it’s interrupted by a harrowing event involving a teen girl, America Chavez (Xochitl Gomez, The Babysitter’s Club), who is jumping through the multiverse and being pursued by dark forces. Doctor Strange must protect America and team up with mystical allies from multiple realities in order to defeat a disturbingly dangerous foe.

Doctor Strange and the Multiverse of Madness is Sam Raimi’s first comic book film since Spider-Man 3, and it’s a return to his roots as a cult horror director. This will be exciting for some, and it definitely has its fun moments, but Raimi is far more interested in playing with corpses, pushing the boundaries of grotesque violence in the MCU and generally overindulging himself than in telling a coherent, three-act-structure story. Not since The Mummy Returns have I seen a big budget sequel to a fun, well-plotted movie descend so quickly into “Add too much of everything and keep it coming non stop!”

Cumberbatch is good as always, though frankly he had more good moments as an actor in Infinity War and No Way Home than he does here. Gomez is an endearing presence in a character who would have been well served by letting the movie slow down long enough to get to know her. By far the strongest, yet also the most frustrating performance, comes from Elizabeth Olsen as Wanda Maximmoff, and that’s really all I can say without spoilers, except that as good as she is here, it doesn’t compare with her stellar work on WandaVision.

The screenplay by Michael Waldron is a total mess, and it makes some sense to me to know that he wrote for Loki, the most inconsistent and ultimately disappointing of the MCU series for Disney+, one that for me, completely fell apart in its third act and left me feeling like my time had been wasted. Where the first Doctor Strange is full of smart, delightful humor, Doctor Strange and the Multiverse Madness tries to get the vast majority of its laughs through macabre “that’s not right,” moments of squirm-inducing gore. Sometimes it works, sometimes it doesn’t.

On the whole, Doctor Strange in the Multiverse of Madness is the first Marvel movie in quite some time where the minuses outweighed the pluses for me. Simply put, I didn’t enjoy it. I wouldn’t say I hated it—there are some strong elements mixed in there—but it represents everything I dislike about sequels and felt far more like a product that I was being sold than like an actual movie. It’s slick and glossy, but there’s only a small amount of substance, and literally all of that comes from Olsen’s acting in an underwritten role. I’m not calling it one of the year’s worst films by any means for two reasons: one, there are much worse movies out there, and the parts that work certainly do work. That being said, the other, harsher reason that is going to lose me some geek cred is that in this particular case Scorsese, Champion, Coppola, et al are absolutely correct: Doctor Strange and the Multiverse of Madness just isn’t cinema. –Patrick Gibbs