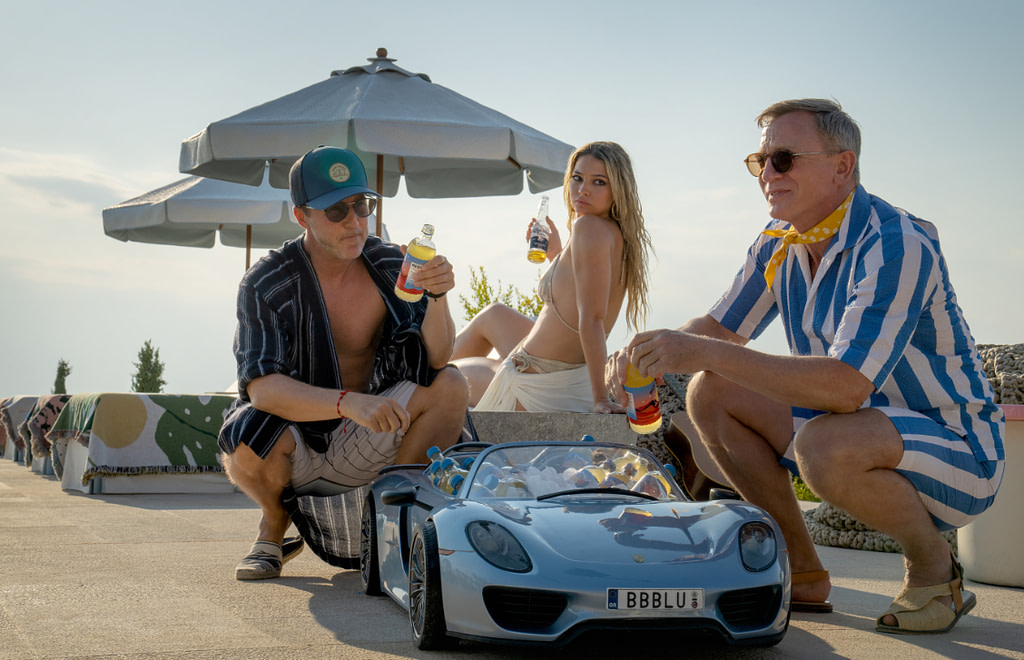 Glass Onion: A Knives Out Mystery is a product of its hyper-specific time. Following the success of his 2019 whodunnit hit Knives Out, writer/director Rian Johnson struck big with Netflix. The streaming giant paid $469 million practically as a commission for two more movies starring Daniel Craig as the “last of the gentlemen sleuths” Benoit Blanc. This deal went into place in March of 2021, a year after the COVID-19 pandemic kicked off. Hot off the heels of a dozen or so national and global events of every variety forcing many across the U.S. to question our systems and biases (for reference, see: March 2020 – January 2021), Johnson would have sat down at his laptop with a lot of thoughts and feelings to draw inspiration from. Knives Out’s use of the Trump Administration’s deportation policies to raise the personal stakes and its allusion to the rise of white supremacy in America could be written comfortably. It wasn’t a risk to assume that these unfortunate systems and developments would continue through late 2020 at the earliest. Glass Onion, however, was to be born out of the sharp, broken shards of a disrupted America…and it shows.

Glass Onion picks up with the previous film’s Southern sleuth Benoit Blanc two months into the pandemic. Blanc has hit a wall both professionally and mentally, spending weeks at a time in the bath playing online games with friends (with some particularly lovely cameos that I won’t spoil here). While Blanc remarks this type of behavior is common for him between cases, he admits he needs a good case to get him out of his funk. Fortunately, there’s a package at the door offering him the dangerous getaway he needs.

The package is an invitation from one Miles Bron (Edward Norton), a “tech-genius billionaire” with a private island and far too much money to spare. He’s invited his closest friends to share in a summer party with him, away from the world and, more importantly, away from the pandemic. The party itself is a murder mystery party, in which Miles has challenged his friends to solve his murder. It’s all meant to be for fun, with Miles’ friends assuming the invitation of Benoit Blanc to be a kind of decoration–the equivalent of inviting a celebrity impersonator to a party based on a movie. Blanc himself assumes the same thing…until he arrives on the island and Miles makes it very clear that he never invited Blanc. Blanc’s presence is only the beginning of the mystery, as the night of the murder mystery party ends in a death only one person can answer. Who is that person? You’re going to have to watch and find out, because I’d hate to spoil the fun.

With Glass Onion, Johnson has crafted yet another cracker of a mystery with a twist that’s sure to please fans of the first and newcomers alike. The films have different goals, so though the mystery itself is simpler than that of Knives Out, the thrill remains the same. With Glass Onion, Johnson continues to make quality and satisfying mysteries in an age of mystery boxes and poorly executed “surprise twists” that prove well-written characters and expertly crafted tension can get just as much of a rise out of audiences as your standard, mass-produced blockbuster nonsense.

The cast has no weak performances, and in each character Johnson finds opportunity for disruption. Cline’s Whiskey seems like your standard arm candy for Bautista’s Duke but reveals herself to be a smart, manipulating person with plans for politics. Duke himself could lack depth without audience complaint, but Johnson writes him as a loyal friend despite his abhorrent beliefs about the “natural roles” of men and women. Are these characters good people? A case could be made that none of them are, but they’re well thought out nonetheless. I also have to give massive credit to Daniel Craig, who once again delights as Blanc and makes his return to the character even more of a joy to behold. With this performance, he cements Blanc’s status as the modern heir to the “#1 Beloved Detective” throne left vacant since the golden days of Columbo.

A terrific cast and a charming lead aren’t all that Glass Onion has to offer, though. I said earlier that it’s a product of a very specific time in our nation’s history, when many Americans are reconciling with the status quo. We have seen the beginnings of and remain on the verge of a great political upheaval in our country–a disruption if you will. Glass Onion not only recognizes this, but picks a side and then some.

In the first act, after the guests’ arrival but before the doomed murder mystery party, Norton’s Miles gives a speech to Blanc about what unites this group of people: they’re all “disruptors”. After listing their mostly performative achievements in so-called disruption, Miles explains his belief in disruption theory and says: “They’re going to call you crazy. They’re gonna say you’re a bully. They’re gonna tell you to stop … Because as it turns out, nobody wants you to break the system itself.”

When thought of in the political and social contexts of early 2021, one sees why Johnson arrived at this commentary in this setting. In giving this ethos to an out-of-touch billionaire, Johnson’s able to make the point explicitly while also jabbing at the one percent’s performative disruption. Miles’ idea of breaking the system is renting the Mona Lisa at the height of the pandemic. For another character, breaking the system means literally breaking everything. The film ends with the destruction of wealth and the arrival of consequences for reckless, selfish actions. At its explosive climax, Blanc sarcastically and with great gusto remarks, “Disruption!” in the face of it all. In comparison to Knives Out’s political and social commentary, Glass Onion’s wholehearted, explosive support for the breaking of the system sends its message with the cinematic equivalent of a slap to the face: Some things need to be broken for better things to be made right.

At the end of the day, Glass Onion: A Knives Out Mystery is yet another endlessly entertaining watch as well as a satisfying showcase of quality genre filmmaking, and I eagerly await the next one. –Max Bennion