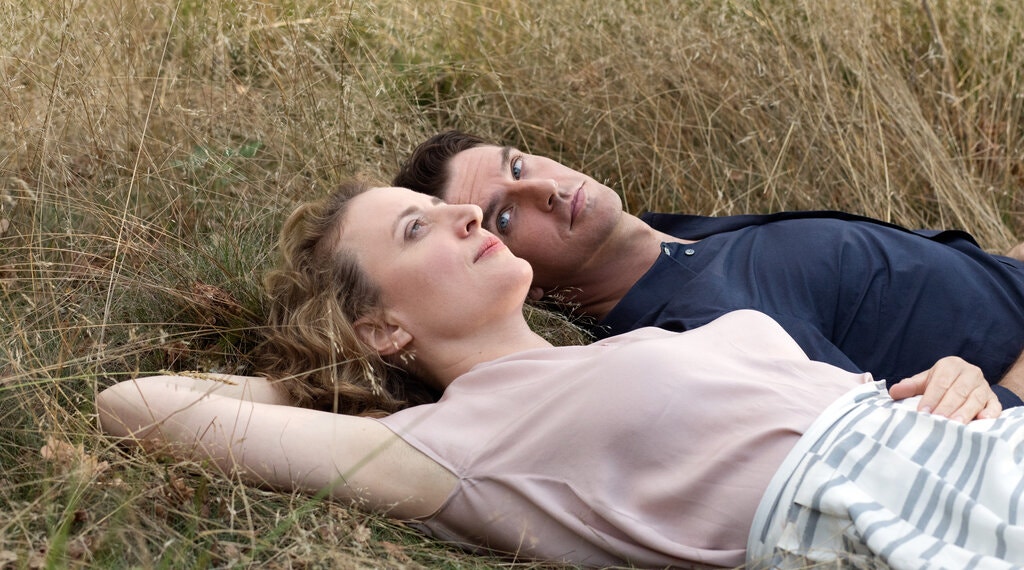 I will admit that I’ve never actually seen Downton Abbey, but I really haven’t understood the love everyone has for Dan Stevens. He was perfectly adequate in Colossal, but his performances in Beauty & The Beast and the treacly The Man Who Invented Christmas left me cold. But I’m Your Man has put me firmly into the fan category, provided he is playing an Eastern European.

I’m Your Man is a German-language film about a scientist named Alma (Maren Eggert, Giraffe, The Invisibles) who agrees to participate in a study in exchange for funding for her own research. The details are simple: For three weeks, Alma is required to live with Tom (Stevens), a humanoid robot designed to be the perfect life partner for her, tailored to her personality and tastes, with the ability to listen and adapt in order to please her more perfectly in every way possible. While Alma resents the intrusion and doesn’t want Tom around, she slowly finds herself becoming accustomed to his presence and even forms a bond with her prospective positronic partner.

Director Maria Schrader (the Netflix series Unorthodox), who co-wrote the screenplay with Jan Schomburg (Above Us Only Sky), goes for a light and understated approach to the comedy, which serves I’m Your Man well. The mix of whimsy, satire and insightful relationship drama works perfectly, in a relaxed manner that we would never see if this same story were made as an American film.

Eggert’s Alma is a wonderfully complex, anguished and very human character, starkly contrasted against Stevens’ unflappably cheerful robot, which creates an intriguing dynamic. Stevens surprised me with his scene-stealing performance as the Russian pop singer in Eurovision Song Contest: The Story of Fire Saga, and while this is a different style of comedy, he proves to be no less adept at it. Tom is one of the most quietly endearing characters of the year, an enigma in that he seems to be as fundamentally good-hearted as they come, yet he has no heart at all, of course, and any emotion he displays is purely functional.

Yet just as Alma comes to warm to him more and more, finding it increasingly difficult not to treat him as a human, the audience is left to wonder just as she does: Is this really all programming? The even bigger question at play is that of whether it even matters. I’m Your Man is a romantic dramedy with substance, charm and a sad sense of the frustrations of love, relationships and life goals. Stevens and Eggert also acted as executive producers on the project, and one has to wonder how big a factor Stevens’ presence played in getting this film made—it certainly plays into selling the film to an international audience.

I’m Your Man is Germany’s official submission for the Best International Film Oscar. While it’s going to be a competitive category, this delightful combination of effervescence and melancholy is a winner any way you look at it. –Patrick Gibbs