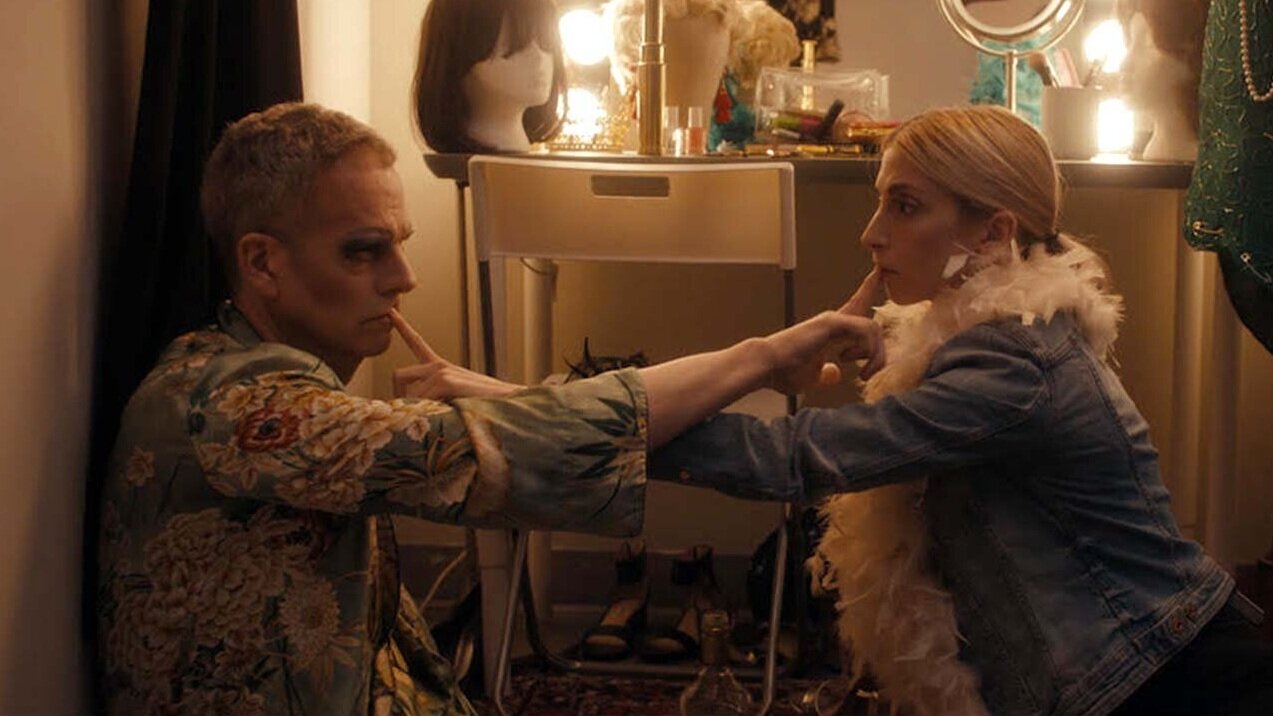 As a queer person, it’s been interesting to watch movie studios grapple with LGBTQ+ inclusivity in the media they produce. Especially for films that have a larger financial backing—such as last year’s Happiest Season—there’s a very apparent identity crisis about who the movie is for: Is it for straight people? Queer people? Are they trying to do both? The production companies know they need to appeal to demands for equal representation, but they also need to ensure that they’re making a guaranteed profit. The result is usually a mishmash of in-group references mixed with Dan Levy, all coated in awkward messaging about how we’re “really all the same after all.” It’s not just big studio movies that have this problem either—even smaller productions like Milkwater still struggle to determine its target audience.

This debut feature from writer-director Morgan Ingari follows Milo (Molly Bernard, The Intern), who struggles to find her place in the rapidly evolving landscape of adulthood while her best friend grapples with pregnancy. After a chance meeting with Roger (Patrick Breen, The Assistant, Galaxy Quest), a single gay man in his ‘50s, Milo decides on a whim to become the surrogate mother for his child. However, as the baby begins to grow, so do the strains of Milo and Roger’s relationship.

Feeling plucked straight out of the 2000s indie-core scene, Milkwater is perfectly styled after the early works of Miranda July or even films like Frances Ha: It’s a Millennial-Brooklyn-coffee-shop-Zooey–Deschanel vibe. Ingari creates this tone through several heavy needle drops, plenty of quips and one-liners; most of all through Milo, who, as a result of her chronic inner turbulence, is recognizable as the “quirky girl” archetype. All of these qualities are easy to point out and joke about, but they aren’t bad in and of themselves and actually show Ingari’s—intentional or not—aptitude in employing genre conventions.

By using this familiar aesthetic of “indie films,” Ingari is able to fit Milkwater into a kind of cultural lexicon and normalize the experiences of queer people. Showing Roger’s struggles as a gay man in a style that recalls Ghost World, Juno, 500 Days of Summer, etc. is a clever way for a director to reach a wider audience and give these stories the same significance. Additionally, the film reveals some of the barriers that queer people face in their lives in a non-confrontational way, which is great for a more casual audience who might not have a lot of real-life interactions with LGBTQ+ people.

The problem with making a film for this audience is that it becomes a watered-down portrait of the community it’s supposed to be representing. One of the film’s major conflicts comes from the legal contract Roger and Milo sign for the child. As dense and legally binding documents, these contracts can be enormously prohibitive—especially for anyone without swaths of privilege—and any scrutiny reveals the extent to which legal systems are in place to disadvantage or outright block out LGBTQ+ families. But Ingari chooses to show very little of this nuance. Instead, the film frames the intensity of the contract as part of Roger’s increasing dominance as a parent and Milo’s concerns of signing it as her twee paranoia. These aren’t just oversimplifications—they are not the reality of the situation.

On top of this, the overall plot follows Milo and Roger’s journey with the child, but a lot of what happens in between all of that concerns Milo’s relationships with her friends, co-workers, romantic interests and how her spontaneity gets in the way of all these relationships. The queer story here becomes a backdrop as the film becomes about a straight woman dealing with the consequences of her actions. Queer people do not exist to inspire straight people to be kinder and more responsible—let’s put that narrative to rest.

At the same time that I admire Ingari’s ability to make something as complicated as surrogacy more approachable, I am also deeply troubled by the ways in which the film makes the queer experience more palatable at the cost of reality. Creating queer films right now is difficult because it seems that a director has to decide between making a truthful movie or one that will be seen. Luckily, this isn’t always the case, and recent films such as Shiva Baby have excellently shown the complexities of queer life without trying to fit our stories into homogeneous molds. With the success and availability of such films, it’s hard to make exceptions for anything lesser.

Milkwater is a nice enough time if you’re not really digging into it. The film has solid performances, with some tender scenes from Bernard and Breen in particular. It’s well-paced, produced and feels comfortable to watch. But the more I think about it, the more frustrated I get that movies like this are still being made and that conversations of queer life in mainstream media are still so surface level. –Aidan Croft