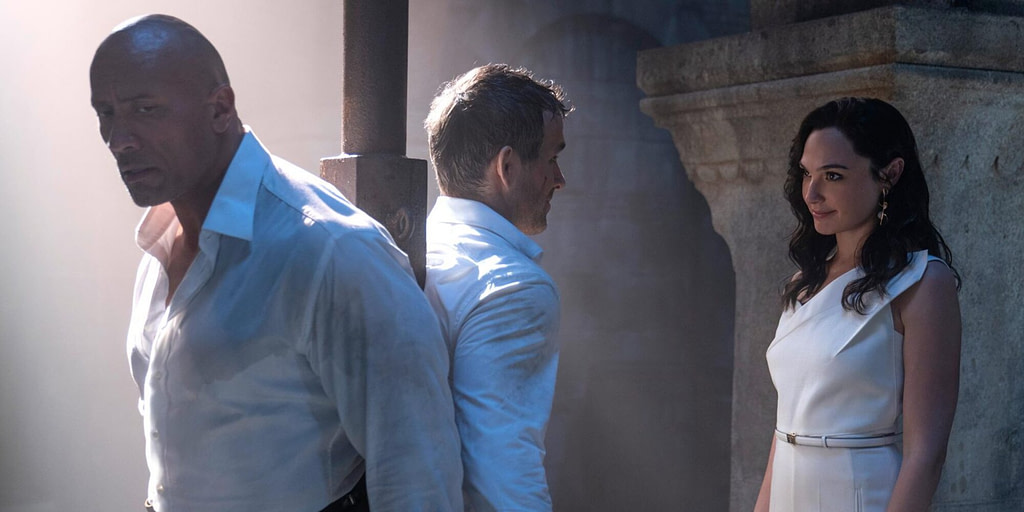 No matter how hard you resist it, every movie lover will eventually reach the “They don’t make ’em like they used to” stage of life. Sometimes they make them worse, and sometimes they make them even better, but either way, we all have our nostalgic soft-spots. Red Notice taps heavily into one that I didn’t see coming: the Road to movies starring Bob Hope, Bing Crosby and Dorothy Lamour, which followed a formula of self contained stories featuring Crosby and Hope playing globe trotting friends and/or rivals searching for some sort of treasure, always to have a beautiful and mysterious woman played by Lamour come between them.

When an Interpol-issued Red Notice—the highest level warrant to hunt and capture the world’s most wanted—goes out, the FBI’s top profiler, John Hartley (Dwayne Johnson, Jungle Cruise), is on the case. His global pursuit finds him in the middle of a daring heist where he’s forced to partner with the world’s second-greatest art thief, Nolan Booth (Ryan Reynolds, Deadpool) in order to catch the best of them all, “The Bishop” (Gal Gadot, Wonder Woman). The ensuing adventure takes the trio around the world and the dance floor, into a secluded prison and deep into the jungle, Inspector Urvashi Das (Ritu Arya, The Umbrella Academy) relentlessly pursues them.

Writer-director Rawson Marshall Thurber (Dodgeball, Skyscraper) specializes in making movies of other movies, but his casting and his vision of mixing the fashioned comedies with Jerry Bruckheimer is an appealing one, and it’s executed with such goofy confidence that Red Notice is easily one of the most briskly entertaining films of the fall season. The film is something of a breakthrough in the ongoing attempt by Netflix to produce a high-profile blockbuster that can compete with the big guns in Hollywood: The spectacular chase sequences are fast and furious and the stars are clearly having a lot of fun.

After stumbling with The Hitman’s Wife’s Bodyguard, Reynolds has bounced back big time with Free Guy and Red Notice to deliver two winning big-budget vehicles in a row that prove he can deliver without the Deadpool brand name, finally emerging as a movie star in his own right. The Hope persona from the old Road to films fits Reynolds like a glove while still allowing him plenty of room to do his own thing. This longtime comedy adventure enthusiast felt almost giddy watching Reynolds, Johnson and Gadot capture the old dynamic so well.

Red Notice doesn’t exactly have the most enthralling or memorable plot and it could have definitely used a stronger villain. However, Road to Singapore was the only film in that entire series that had anything resembling a real plot, but they were all great fun. While Red Notice has no direct connection to the series, this clear homage provides just enough goofy antics to keep things moving, to propel Indiana Jones-and-James Bond–style action and to make it an enjoyable distraction. Red Notice is about as artistically unambitious as a film can get and it may be a guilty pleasure, but for me, it was a pleasure; it’s a breezy, energetic romp that knows exactly what it’s trying to do and does it with glee and enough skill to make it worth your time. –Patrick Gibbs