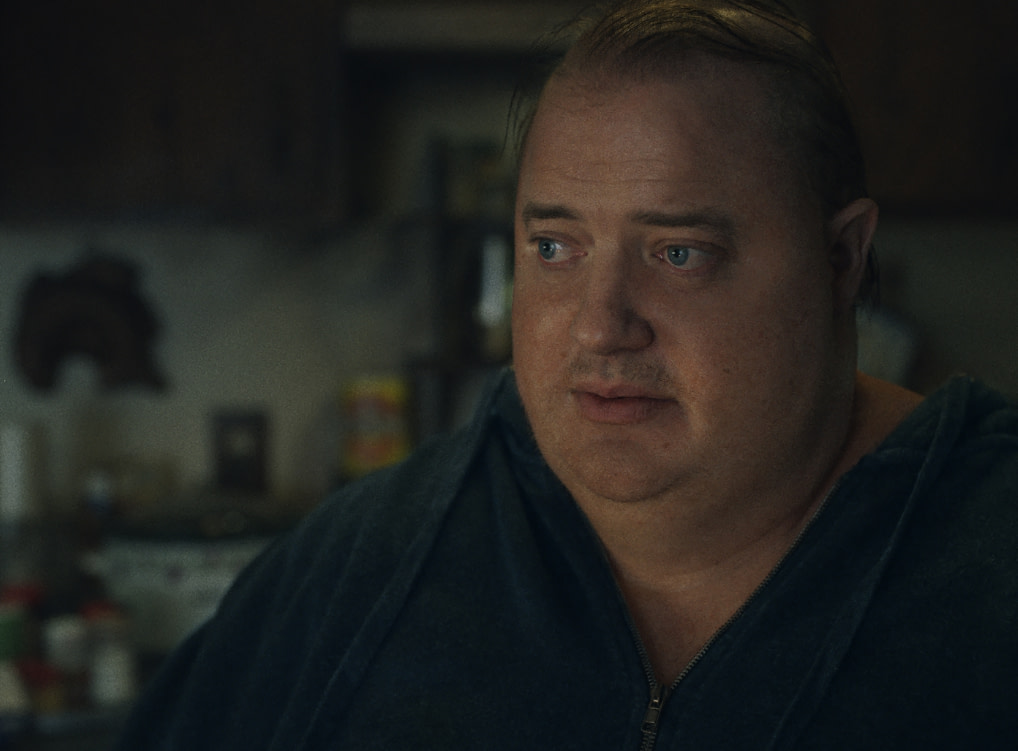 Throughout the course of Darren Aronofsky’s illustrious film career, he’s only made two features based upon existing material. In the case of 2014’s Noah, Aronofsky recognized that he was working with lousy source material and threw the book out the window. If only he’d been willing to do the same with The Whale.

Brendan Fraser stars in The Whale as Charlie, an English teacher who teaches all of his classes online from home and pretends that his webcam is broken in order to hide the fact that he is a 600-pound shut-in. Charlie is checked on daily by a nurse named Liz (Hong Chau, The Menu), as Charlie is largely immobile and suffers from congestive heart failure. Liz and Charlie are connected through Dan, Charlie’s deceased lover. Furthermore, Liz is Charlie’s only friend, as Charlie’s choice to leave his wife and child for Dan, one of his students, alienated him from everyone significant in his life.

As penance for his supposed sins and to escape his loneliness, Charlie is quite literally on a quest to eat himself to death. However, when his angry and troubled daughter, Ellie (Sadie Sink, Stranger Things) makes a surprise visit, he sees an opportunity to reconnect with her and offers to pay her to spend time with him, going so far as to do all of her homework for her as an exchange for her company.

There was an incredible opportunity in this film for some inclusivity, to present a meaningful story about obese people, who are a marginalized section of our population. The very title, The Whale, should be your first indicator that Aronofsky has gone in entirely the wrong direction. Granted, there’s a double meaning to the title in that Charlie’s favorite essay is one about Moby Dick, written by an unnamed author (at least three viewers of the film thus far have gone on the record stating that they didn’t see the author’s identity coming from a mile away, and also that they still can’t believe The Village takes place now).

This embarrassingly on-the-nose contrivance illustrates the groan-inducing nature of Samuel D. Hunter’s melodramatic and hamfisted script, adapted from his own stage play, which revels in an in-your-face attempt at boldness lacking in any subtlety or intelligence. The only things that Hunter succeeds at doing are repeatedly insulting the intelligence of his audience and demeaning, shaming and exploiting an entire section of the population with his use of broadly drawn caricatures in place of actual characters. The Whale leads toward a rote message of compassion at the end, though the amount of weight shaming, self loathing and lurid exhibitionism that it takes to get us there is more in tune with ’90s daytime talk shows than it is with art. Hunter’s dialogue seems to be cobbled together by sampling liberally from books of fat jokes and inspirational quotes and peppered with melodramatic speeches.

Fraser throws himself into his performance, and I’d really love to see him make the comeback that he deserves, though it would be a crime to give any major awards to The Whale. Apart from one scene of heartfelt emotion, it’s not the undisputed career best achievement that we’re being led to believe. Aronofsky’s preferred style of acting invariably leads to histrionics, and in this case, the supporting cast is particularly ill served by the director’s propensity toward cheap melodrama.

Sink is a gifted actress and a personal favorite, and it saddens me to say that while she is acting her heart out, not even Kate Bush could save her from this hackneyed variation on The Wrestler. Ty Simpkins (Jurassic World, Iron Man 3) as a young Christian missionary named Thomas is quite good until the script pulls the rug out from under him, and Samantha Morton, who was so memorable in She Said, leans toward parody as Charlie’s ex-wife, Mary. Arguably the best performance comes from Chau, simply because she’s given the smallest number of terribly written moments.

The Whale is one of the worst films of 2022, an unrelentingly repulsive and degrading film that does everything in its power to put its lead character on display as if he were part of a freak show, then turning on a dime and trying to guilt the audience for the filmmakers’ sins. As to the very legitimate questions as to whether the role of Charlie should have been played by an actor who was the size of the character rather than putting Fraser in a prosthetic suit, it’s point rendered moot by the larger issue that there is no reason or excuse for this movie to ever have been made. –Patrick Gibbs