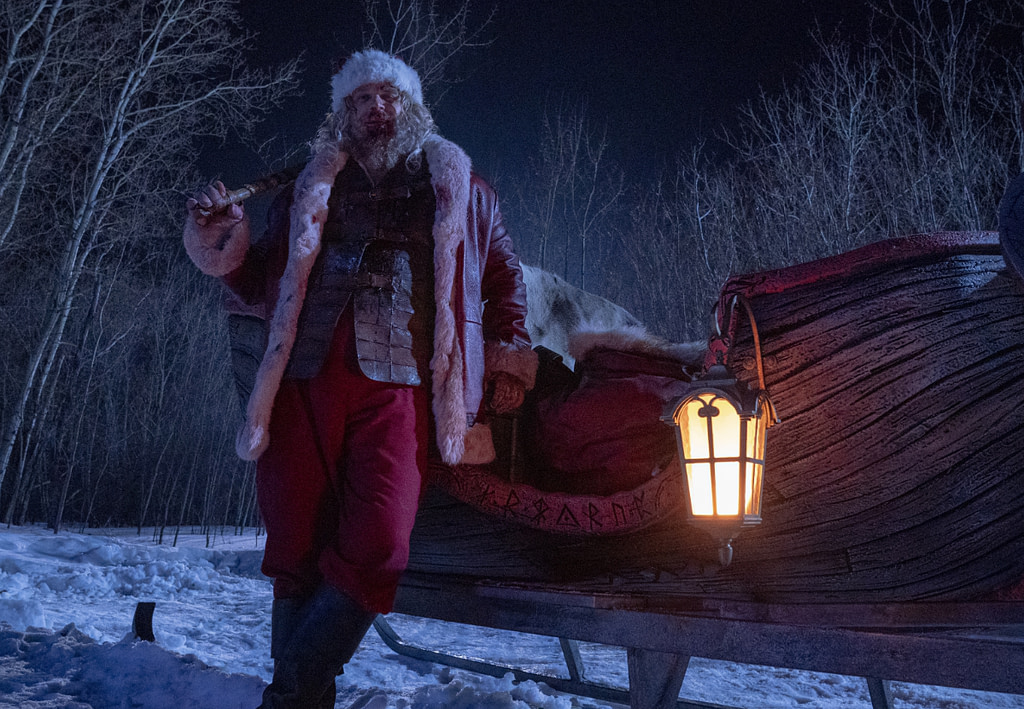 I’m one of those people who considers Die Hard to be a Christmas movie, and it’s an important part of my holiday tradition. It was inevitable that, one day, the “right guy in the wrong place at the wrong time” genre that it inspired would lean to Violent Night, an over-the-top action comedy that leans into the blueprint’s yuletide element and takes it to a new level.

Violent Night’s Santa Claus (David Harbour, Black Widow, Stranger Things) is cynical, burnt out, drinking too heavily, having marital problems and struggling to summon enough Christmas spirit to fulfill his duty of bringing joy and gifts to the children of the world this year. Santa arrives at the lavish, mansion estate of the wealthy Lightstone family on Christmas Eve in order to drop off a gift to a deserving young girl named Trudy (Leah Brady), only to find that a group of mercenaries are seizing control of the compound and taking everyone inside hostage. The leader of the group of villains, Jimmy Martinez, code name “Mr. Scrooge,” had everything planned out, making a list and checking it twice. Scrooge didn’t count on a coal in the stocking, however, and when Santa decides to take the guys off the naughty list permanently, we are all in for a Violent Night.

Of course, a R-rated action comedy about Santa Claus that throws itself into its titular violence with gusto isn’t for everyone, though director Tommy Wirkola (Hansel and Gretel: Witchhunters’) is smart enough to be aware of this fact. The screenplay by Pat Casey and Josh Miller isn’t great, though its parody moments are strong. Violent Night works because it’s keenly aware of its audience, namely action fans with a subversive sense of humor.

David Harbour pulls off disheveled, past-his-prime Saint Nick ready to kick some ass in a way that it’s hard to picture truly working coming  from anyone else. Harbour puts everything he’s got into each role, and he’s clearly having a blast with the tongue-in-cheek parody. He’s also got a wonderful, tender side, and interplay between Harbour and Brady as little Trudy is surprisingly sweet.  Whenever the film is focused on these two, it’s a joy to the world.

Violent Night  falters whenever it becomes too focused on the shrill, obnoxious Lightstone family, and during those interludes, I found myself wanting to return to the action. The only reason those sequences are tolerable at all is John Leguizamo, who is nearly incapable of giving a bad performance and seems to be having almost as much fun as Harbour. Leguizamo’s first major movie role was as one of the mercenary terrorists in Die Hard 2 in 1990, and there are plenty of winking references to that film throughout (even the infamous icecycle stabbing).

The action in Violent Night is lively and played more for laughs than suspense and excitement. The sheer outrageous brutality of some of the more extreme deaths is darkly hilarious, as Santa uses every weapon at his disposal, even the star from a Christmas tree as a deadly weapon. The more outlandish and nasty, the funnier it gets, and it makes for great parody of 80s and 90s action, recalling Edgar’ Wright’s  Hot Fuzz in all the right ways, though the film overall doesn’t reach comparable levels of brilliance.

To call Violent Night good is almost giving it more credit than it deserves, yet this naughty treat makes the nice list for those needing an edgier alternative to Hallmark movies. If you’re looking for some wacky, guilt fun this season, unwrapping this wickedly silly, indulgent gift may be just the thing to give you some holiday cheer. –Patrick Gibbs