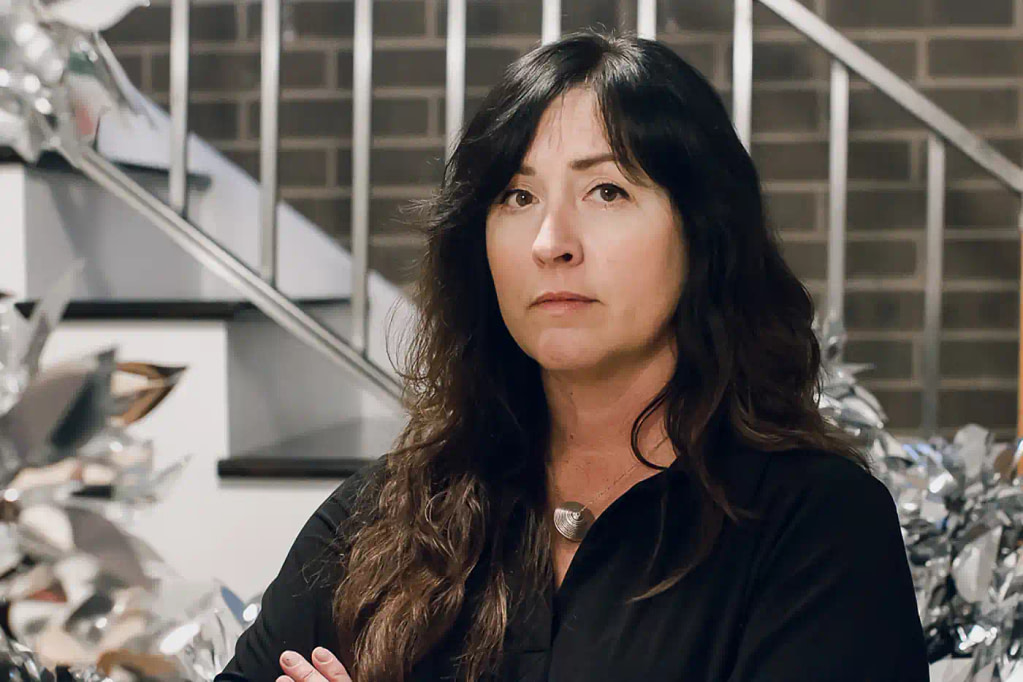 UTA Trax cars zip from University hills to west-side valleys, past schools, shops and churches. Carrying more than just passengers, these cars hold research-grade air quality sensors. They catalog things we can’t see—ozone, the valley’s main summertime polluter, and PM 2.5, the particulate matter that blankets our wintertime, turning Salt Lake City into a snow globe of ash. Soon they’ll carry something else: segments of public art piece In Search of Blue Sky, decorating  Trax car interiors and the sides of public buses. The installation seeks both to raise community awareness of the air quality data and embed it with personal meaning. “Just putting data out there doesn’t move people, doesn’t change people,” says Wendy Wischer, the project’s artist. “Artwork can pull at emotions, and to act, we need to be moved emotionally.”

Wischer was first approached by Jon Lin several years ago when the sensors were installed. Both faculty at the University of Utah, Wischer teaches Sculpture Intermedia in the College of Fine Arts and Lin is a professor of Atmospheric Sciences. They received funding through the university’s Global Change & Sustainability Center (GCSC), described on its website as “an interdisciplinary hub catalyzing research on global [climate] change and sustainability.” Creative Writing Ph.D. candidate Lindsey Webb from the College of Humanities became their student collaborator, who collaborated with Wischer and Lin to write the text.

“The more we care about each other [and] the more we feel connected to each other, the more we’re going to take action that supports a healthier environment for everybody.”

Wischer boasts a long resume of environmental art installations, having collaborated with geologists and engineers in the past. Her work explores boundaries and the places where art and science collide. Art brings a different perspective and problem-solving process to climate issues, one Wischer believes may help us navigate their complexity. “I often am seeking connecting threads between disparate ideas,” she says. “We need the disciplinary expertise, but we also need to think about … incorporating those skill sets in different ways.”

The In Search of Blue Sky panels will be a pop of color in the cityscape, each one boasting a short poem or phrase on a serene, blue-sky backdrop. Wispy cirrus clouds seen in fair weather drift lazily from one panel to the next. Webb’s words are simple, yet poetic meditations on the air around us, its beauty and degradation. In Search of Blue Sky’s simplicity may be its strongest asset—in the chaos of traffic, billboards and advertisements, it’s a breath of fresh air. It evokes a longing for that simplicity, just out of memory.

A QR code or URL lets passersby with a smartphone instantly access both the project’s website and the data collected in real-time by the Wasatch Environmental Observatory (WEO), perhaps even captured by the train car they’re sitting in. Wischer says, “I hope that this curiosity sparks conversations and that people will take further action, whether that’s riding more public transportation … [or] voting in ways that support certain policies and programs.” The data is meant for everyone. But, says Wischer, most people don’t know it exists. The campaign is accessible and bilingual (both the signage and website are in English and Spanish), and she hopes it will inspire people to learn and care more about the issue, inciting action in whatever form that might take.

Air quality has been a pressing issue in Salt Lake City for a long time, though little has been done on the state and city levels to address it. One notable takeaway from the data is the inequitable distribution of hazardous air quality. Although everyone is affected, communities on the west side and lower-income areas suffer the most as the negative health effects of air pollution compound with other structural inequalities. As in all climate fights, our greatest weapon comes in community; our strongest allies are each other. Wischer wants the art of In Search of Blue Sky to remind us that we all have a stake in the fight. “The more we care about each other [and] the more we feel connected to each other, the more we’re going to take action that supports a healthier environment for everybody,” she says.

“I often am seeking connecting threads between disparate ideas.”

Wischer believes that the biggest victories in the climate fight often come from local, grassroots efforts. “There are a number of different solutions that might be available,” she says, “but we can’t even get there if we don’t have conversations. We have to have common ground to understand why this is important and why we should care about a neighborhood that’s affected differently than our own.” One solution is public transportation, the vessel for In Search of Blue Sky. Wischer notes that the messages inside the Trax cars are different from those outside—they’re messages of thanks. “We’re always saying ‘oh, you should do this, you should do that.’ Rarely do we say ‘thank you’ for actually doing it,” says Wischer.

Our air is precious. When it’s abundant, we hardly notice it. After three short minutes without it, we die. In Search of Blue Sky reminds us what we’re fighting for; it reminds us that we’re all in this together.

In Search of Blue Sky will run on UTA buses and Trax cars through the month of January, when Salt Lake’s winter inversion is at its worst. To learn more about the project, visit ecoart.website.

Read more on eco-conscious projects in our community:
Embodied Ecologies: Where Disability Meets the Natural World
Highway to the Hydrozone: Eco-conscious Landscaping with Stephanie Duer of SLC Public Utilities