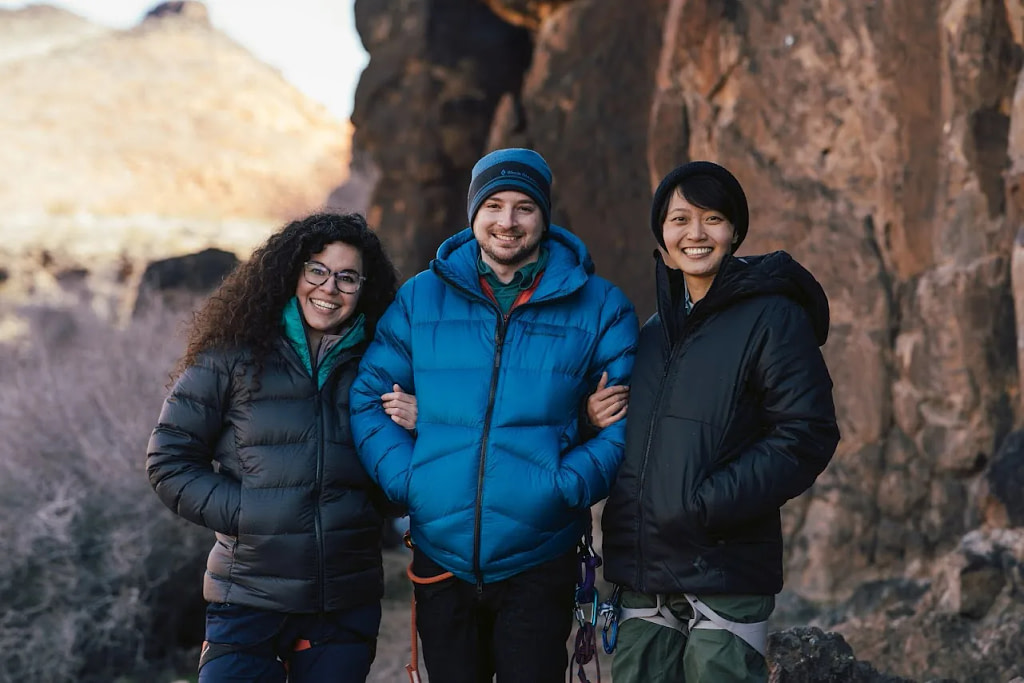 Salt Lake Area Queer Climbers have been providing both in-person and online spaces for the queer community since 2015. After a hiatus during the pandemic, co-organizer Matt Kastellec launched a conversation about bringing it back for Pride in June 2021. After conversations with fellow climbers Leandra Hernández and Rue Zheng, the three have been co-organizing and hosting SLAQC meet-ups nearly every week for a year.

Since the first meet-up, the organization’s reach has grown exponentially. SLAQC’s roots have formed natural offshoots, connecting community members, small businesses, gyms and social justice organizations. The group organizes weekly at The Front Climbing Gym, a place becoming more accessible and supportive to queer people due to SLAQC’s involvement. “So many people come to the gym because they’ve seen us online and factored our group into their decision to move to Utah. They see support for both out-of-state transplants and people who grew up here who hadn’t seen a space for queer climbers until recently,” Kastellec says. “[But] what we’ve built in almost a year is a part of a vision that is not limited to the gym space.”

“So many people come to the gym because they’ve seen us online and factored our group into their decision to move to Utah.”

Utah provides a confluence of outdoor opportunities and a community, but it is also a state in which queer people and queer people of color have historically been dissuaded from exploring. “For queer people, trans women and/or queer poeple of color, the outdoors has an added stressor of real violence,” Hernández says. Many people don’t know where to start or how it could be safe to do so. Kastellec states, “There are really important stories … about how we all deserve to be outdoors.”

SLAQC’s Mentorship Program works to remove as many of these barriers as possible, including formal gym memberships and new gear costs. People who have never climbed before or are just starting out will be paired with a certified climber who will teach them how to set up ropes, climb safely and do so in a way that treats the land ethically. For gear, The Gear Fund Collection initiated a redistribution effort in which people can donate or receive gently used gear. For beginners and experienced climbers, a lending library of guidebooks was created to map out bouldering spots and routes across Utah.

“For queer people, trans women and/or queer poeple of color, the outdoors has an added stressor of real violence.”

“If you’ve never been outside, you may not know where to go. There is an entirely educational component to SLAQC and our outdoor events to teach people,” Hernández says. SLAQC and Color the Wasatch partner often, but one of the most memorable moments for Hernández came when the groups traveled to St. George on a sponsored trip from outdoor equipment brand, Black Diamond. Photographers Bobbie Lee and Lani Galley captured “… two days outside of climbing and celebrating queer and queer BIPOC joy,” Hernández says. “The photoshoot … sought to further promote one of our core values—‘redefine who climbs’—by purposefully putting queer and QTBIPOC climbers at the forefront of a major brand’s advertising campaign,” Kastellec says. Hernández states, “There are so many BIPOC people at the intersection of queerness and racial identity who haven’t had the chance to meet one another.” At events organized by SLAQC at The Front, “both groups get the chance to talk about intersectionality, community, allyship and what that means for white queer people supporting BIPOC queer folks. We share the solidarity, educational wealth and access to items,” Hernández says.

“There are so many BIPOC people at the intersection of queerness and racial identitiy who haven’t had the chance to meet one another.”

Moving forward, SLAQC will continue with their weekly meet-ups, partnerships with other climbing organizations and the Mentorship Program. “I hope we continue to be able to influence the systems/structures/culture of climbing in Utah to be inclusive, accessible, and supportive of all climbers,” Kastellec says. Be on the lookout for SLAQC’s Pride events and more on their Instagram
@slaqueerclimbers.

More on climbing in SLC:
Community, Merriment and Climbing At The Deadpoint Competition
The Front Climbing Club Expands With A New “Community Hub”