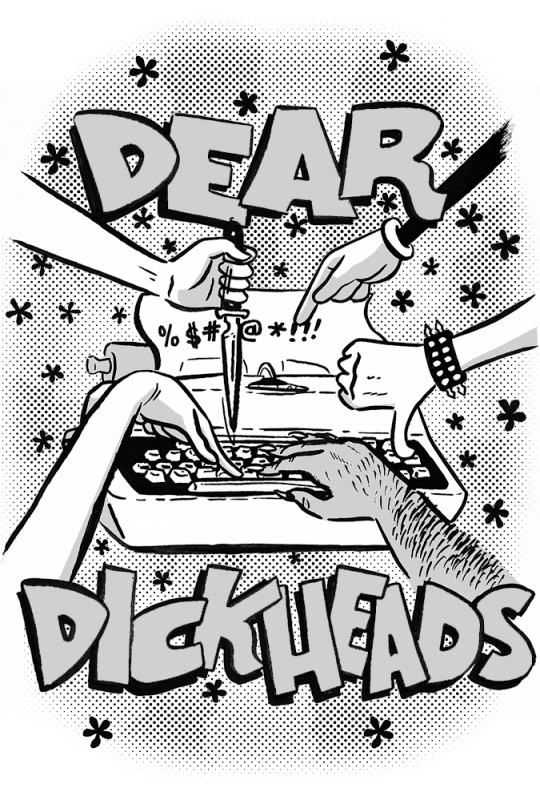 The other night, I found myself sitting in a sticky, red pleather Denny’s booth at 3 a.m. With my head resting on my hand, I watched, helplessly, as one of my drunkard friends squeezed a lemon into her open peeper, trying to “see if it worked!” (lame ass!) Because I was bestowed the privilege of being the Double D ( yes we do it safe… except for Shantel, she has herpes), I didn’t find humor in it. To pass the time and drown out the sounds of dirty dishes moving through the “steam cleaner” and waitresses bitching about their shifts, I started looking over my cheaply printed placemat, and to my utter shock saw what they called “The Rockstar Menu.” On this list of grody food, I found Hoobastank HOOBURRITOS! WHAT THE FUCK? HOOBURRITOS!? Last time I checked, Hoobastank meant BALL SWEAT. BALLSWEAT BURRITOS! Who would eat that,  other than my neighbor, and maybe Tom Cruise? But seriously, would YOU eat it? TELL ME, TELL ME TRUE!
Truly yours,
The Bitchess of York

Dear Bitchess of York,
If I had to guess the Hoobastank Hooburrito weren’t referencing ball sweat, but that extremely mediocre alt-rock band. Here at SLUG, we refuse to settle for the mediocre. The Hooburrito sounds as boring as the band that it was named after­––crispy chicken strips, pepper jack cheese, cheese sauce, fried onion, bbq sauce and a side of ranch––I’ll pass. Next time the drunk munchies hit your wasted friends, I’d suggest dropping by Bayleaf Café. They are open 24/7 from Friday at 6 a.m. to Sunday at 6 p.m., and their food is probably less likely to give you heartburn the morning after.

I have a kind of strange request and I was told that you might be able to help me out. My husband is currently at the Oxbow Jail here in Salt Lake. He is a huge fan of the magazine, and aside from going through heroin withdrawals, he is also going through SLUG withdrawals–although not as shitty 🙂 He has been there for about five months and he’s scheduled to be released at the end of October. Do you think he would be able to get SLUG if it is sent straight from you guys? I know that he is able to receive magazine subscriptions as long as they come directly from the publisher. After his release, I would like to have the magazine sent to our home. Your receptionist said that the subscription is $12 a year. That sounds great!

Let me know if that would even be something that you would be able to do.

Dear Sari,
It’s not a strange request at all. Your husband wouldn’t be the first, nor will he be the last, person getting SLUG Mag in the klink. I personally have met a guy that got SLUG when he was at the point and told me it helped him. We don’t usually send them from the office, but if payment is received before the next issue hits the streets, we will hand-mail it ourselves from the SLUG offices.

The only catch is that due to crappy economy and rising postage costs we have had to up our yearly subscription price—but don’t fret, it’s only $15. Just email  the info (his full name, inmate number and the address for Oxbow) to granato@slugmag.com and then send in a check for the aforementioned 15 buckaroos and we’ll get SLUG to your hubby. When he gets sprung, we can switch the mailing address over to your home for the remainder of your subscription.