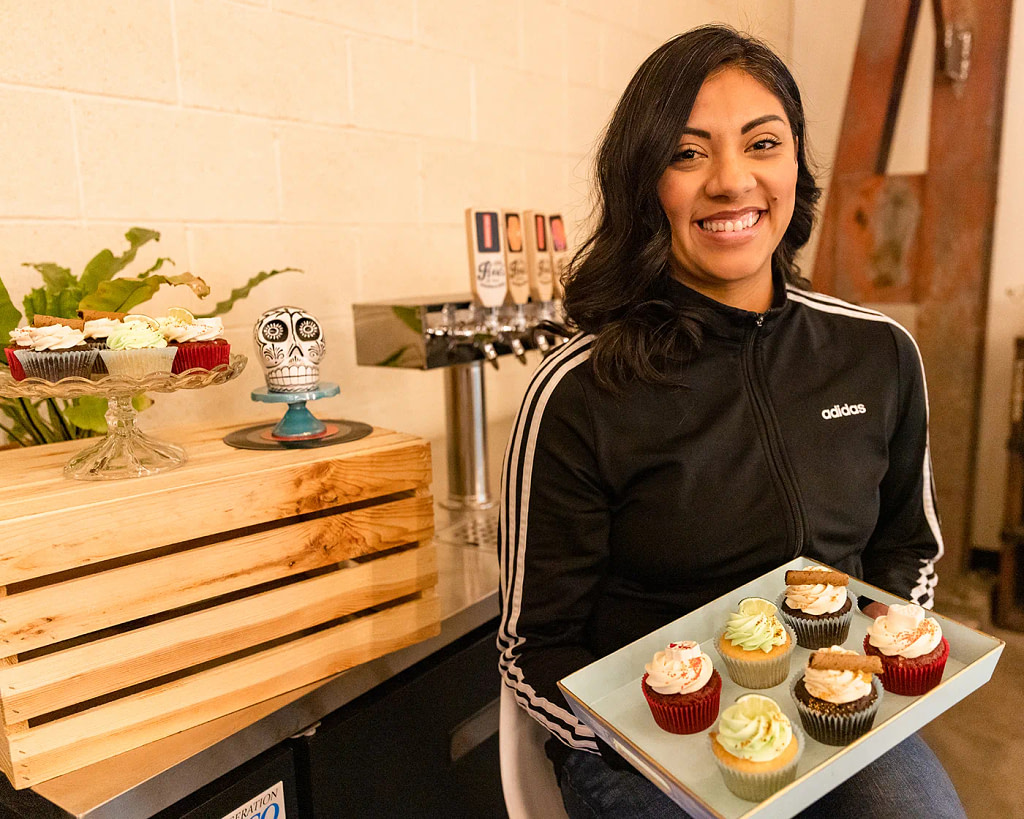 Beer and dessert reside within their own realms of indulgence. Beer is typically sought after for the craft, taste and/or general desire of alcohol consumption. Desserts, specifically cupcakes, can serve as a sugary reminder that it doesn’t need to be your birthday to enjoy a treat. While each of these experiences harbor their unique pleasures, Sweet Vinyl Bakeshop, run by Melissa Diaz, combines the two to produce beer-infused cupcakes for a “match made in brewery heaven,” says Diaz. After much experimentation and product development, Sweet Vinyl produces alcohol-infused cupcakes through collaborations with local brewers, distillers and kombucha makers.

Diaz’s history with baking has taken her all over the country. Starting her apprenticeship in Las Vegas at a shop called Pick Your Poison Bake Shop before moving with the bake shop to Austin, Texas, Diaz pursued her passion for baking into her relocation to Salt Lake City in October of 2019. As a tenured bartender, Diaz was looking for a brewery to call home here in SLC. “I wanted to find a job at a local brewery. I found a home at both Shades Brewing and SaltFire Brewing Co. in South Salt Lake,” she says. “To keep sharp, I took home some beer from my new jobs, baked cupcakes, brought them into the brewery and gave them away to my guests and asked for feedback.” For Diaz, her satisfaction came from seeing the smiles of brewery guests  after pairing a cupcake with a beer.

“I’d like to be a part of the brewery festivals in any form. Baking out of The Leonardo museum has allowed me to bake on a larger scale and I’m stoked to pump out more boozy treats for the good people of Utah.”

Sweet Vinyl Bakeshop came swiftly after. With Diaz’s access to beer and background in baking, beer-infused cupcakes felt like an obvious amalgamation of her two passions. “Hopkins … would be the first to hire me back in December of 2019 . I had gone to several breweries in town with sample cupcakes to pitch my idea and landed some accounts in March for St. Patrick’s cupcakes. I was so excited!,” says Diaz. Soon after, she was selling her beer-infused cupcakes at Hopkins, Shades, Toasted Barrel and SaltFire.

After the mandatory stay-at-home orders in 2020, Diaz had to get creative in terms of how to keep Sweet Vinyl going after all the taprooms had been closed. “Shades Brewing was planning on releasing a new beer every week that would be sold from their loading dock. I got on the phone with Alexandra Ortiz (the Owner of Shades),” Diaz says. “I asked if I could set up a booth next to theirs to sell cupcakes from there. I would bake custom cupcakes for each specific beer release and do a pop-up bake sale at the brewery. She agreed and the rest was history!” Shades’ first beer release was Key Lime Pie, and Diaz’s Key Lime Pie cupcakes sold out in the first 30 minutes. “Every week I doubled the amount I baked, and every week I sold out,” she says.

“I would bake custom cupcakes for each specific beer release and do a pop-up bake sale at the brewery.”

Today, Diaz bakes weekly (delivers batches every Thursday) for Bewilder Brewing and Salt Flats Brewing. Recent releases include the RoHa Blood Orange Sour Cupcake, the Cherry Bomb Firkin Cupcake with Salt Flats’ Blonde Ale and the Red Ale Velvet Cupcake with Kiitos Brewing’s Imperial Red Ale. However, Diaz’s favorite is her Mole Porter Cupcake made with Bewilder Brewing’s Mole Porter. She says, “Not only did I get to enjoy this latin-inspired beer, I got to tap into my Mexican roots and play with ingredients that my mom cooked with that brought back childhood memories—more joy sparked!”

Next, Diaz hopes to participate in more festivals with her cupcakes. “I’d like to be a part of the brewery festivals in any form. Baking out of The Leonardo museum has allowed me to bake on a larger scale and I’m stoked to pump out more boozy treats for the good people of Utah,” she says. For now, you can pick up Sweet Vinyl goods at Bewilder Brewing and SaltFlats Brewing or you can place a private order via email (sweetvinylbakeshop@gmail.com) or direct message on their social media platforms. Follow Sweet Vinyl Bakeshop on Instagram at @sweet_vinyl_bakeshop.