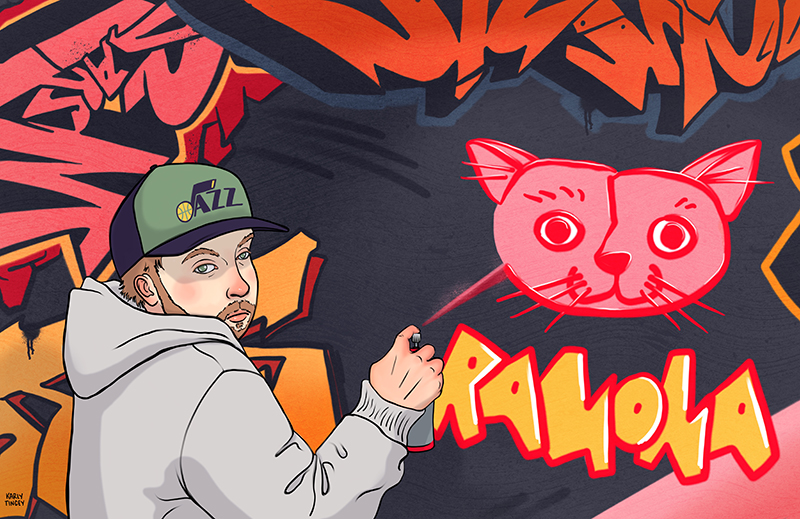 This may be an unpopular opinion—meaning you are more than free to think for yourself and disagree with it. But here it goes: Vandalism is fun. I’ve done more than my fair share, and as I get older, the need to just destroy property has lessened. But yeah, I’ve had phases. From being a disgruntled teen toilet-papering and egging the neighbors’ houses and blowing up mailboxes to this one phase in my late 20s where me and my roommate would maraud home drunkenly from a bar and see how many American flags we could steal.

I’m not bragging—I’m not saying I’m proud of it. But it is what it is. I guess it started when punk rock and skateboarding found me in my early teens. This was before the days of a perfectly flowing skate park in every community. Us young, dumb skater kids had no choice but to rough up private property with blatant disregard for security guards and mall cops if we wanted to shred. At times, it was a bragging right just how long you were able to skate a certain spot before getting kicked out and chased off by the po-po. In some regards, it’s still kind of like that, but for me, it was a beautiful time for skateboarding and, by all means, it was underground and considered vandalism, and that was fun.

Like a round peg in a round hole, graffiti blended into this culture of rebellion and teen angst quite seamlessly among my circle of friends in my high school days. A lot of dudes skated and bombed walls—sometimes simultaneously. Kids would start crews with silly, “thug”-sounding names—probably to overcompensate for the fact that we where growing up on the not-so-mean streets of east Salt Lake. Fun times, for sure.

Graffiti: Art or Dog Piss? (Who Says it Can’t be Both?)

I grew to love and appreciate graffiti as a beautiful rebellious art form, whereas my parents always embraced it as a dog pissing on a tree, just marking his territory. And as I get older, it’s fun to watch kids I knew in high school and my early 20s blossom into legit paid artists while maintaining street cred.

I am by no means an expert on graff or street art of any sort. If you’ve ever seen my zine or the buttons I’ve made in the past, my artistic skills don’t branch out any further than crude stick figures. So yeah, I was never a writer and will never claim to be. I don’t know who the dope crews are in Salt Lake holding it down.

I decided to interview one of my close friends who does. In the spirit of anonymity, which I’ve always considered one of the coolest and funnest aspects of legit street art, his name shall not be printed. Although, many of you reading this would recognize his murals and contributions to Salt Lake’s mural-art culture. I wanted to learn what was dope right now and what’s not, and not be such a fucking poseur.

He invited me down to meet him for a drink at a bar Downtown, which shall also remain anonymous—not because we wanted to tag the place up, but mostly because I’m 86’d from that establishment due to incidents that would require telling you a long story that I don’t have a word count for. (It’s nothing tremendously bad, and I’m pretty sure its not even the same staff who works there from the time I got 86’d, so I thought, “Yeah, what better place to do an interview about graffiti than somewhere where I could technically be considered trespassing?”)

The Red Tape of Modern Graffiti

To be honest, I’ve done tons of interviews over the years and they don’t always go as planned. Maybe you don’t get the information you want from your subject, maybe your recording turned out bad, or maybe your drunk ass didn’t prep for it right. But I wouldn’t say this was a bad interview. I got to kick it with a good friend and bullshit about art and life for a night, which is more important to me than how some interview turned out.

Basically, though our drunk and Adderall-addled minds didn’t always stay on topic throughout the night, we did go over some fun times, and I did learn some shit about paint that I didn’t know before. I picked his brain about what I would consider the unwritten rules of the medium. Sure, there’s shit we all know, like don’t tag on someone’s mural, don’t tag local businesses without permission, and what walls are legal and aren’t.

You’d think most of this shit would be common sense, but when I was a stupid kid, I remember seeing some of my tagger buddies getting their asses kicked for tagging churches. No major beatings—sometimes kids have to learn the hard way. When I brought this up, my friend expressed an empathetic approach to following these “rules,” emphasizing that we where all young and stupid at one point and deserve a chance to prove yourself in any medium you are fucking up in.

Interestingly enough, a crew he’s a member of in a large city in California actually abides by a code of ethics. For lack of a better term, I’ll call these guys “professional” graffiti artists, some of whom have been painting since before I was a twinkle in my father’s eye. They actually have a handbook, with things like how to talk to the cops if you do get busted, where you can and can’t paint and shit like that. I think that’s pretty cool.