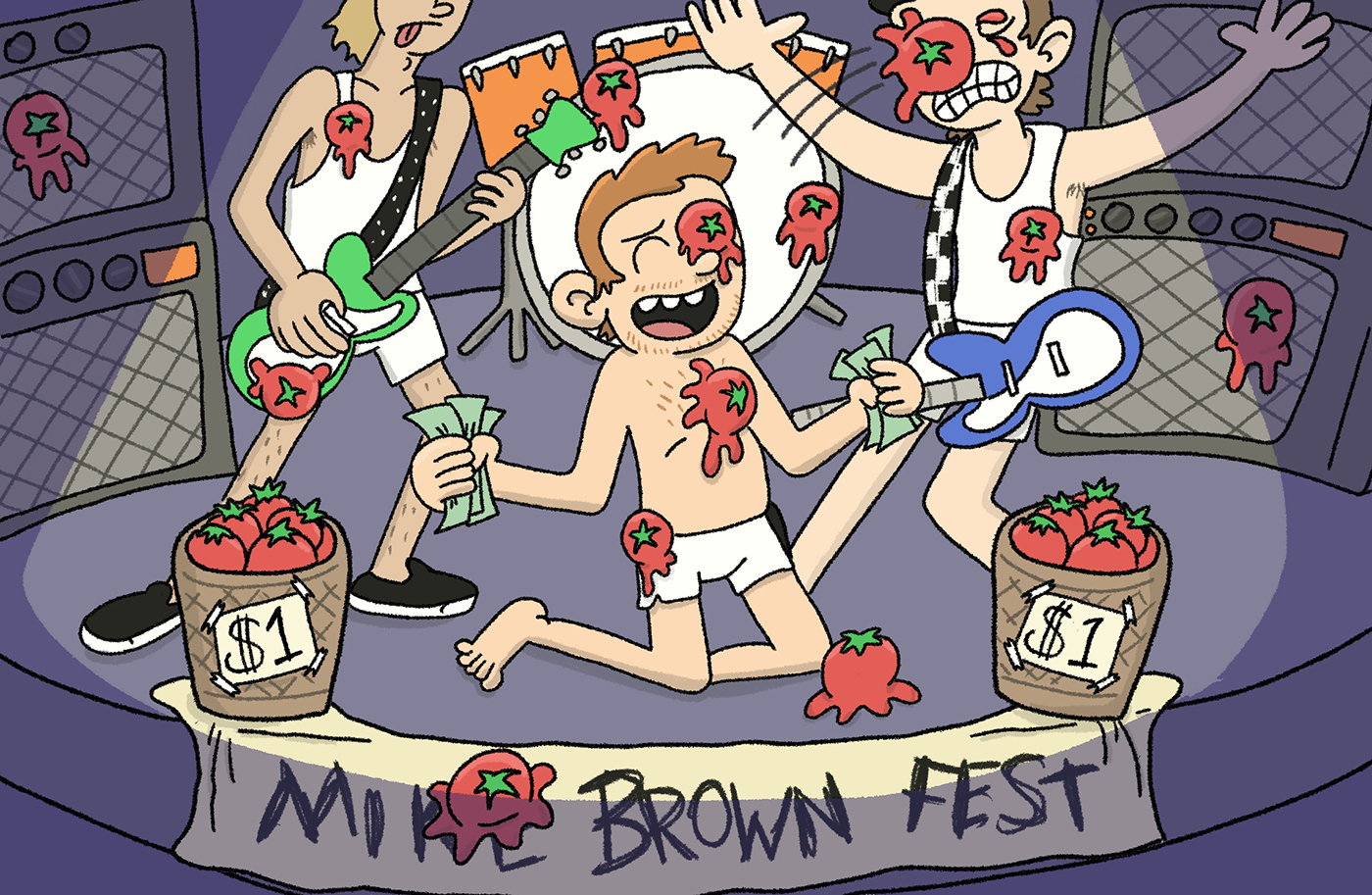 After finally waking up from an 18-month COVID coma, it’s festival season. This month, SLUG renames itself to CLUG (Craft Lake UnderGround), and the festivities are special-er than ever. After some research, my scientific conclusions have determined this: There’s literally always a festival somewhere celebrating something, including myself.

I used to work in a music venue/bar/adult playground called Urban Lounge. The owners got the terrible idea to turn the bar over to me for a night and let me know I could do anything I wanted. I decided to throw a festival. One of the owners suggested just calling it Mike Brown Fest. Being the egomaniac that I am, this worked nicely.

Basically, the only rule was “Don’t get us sued.” Besides an unlimited drink tab, I knew exactly what I would do: Book my own band, The Fucktards, book my friends’ bands and DJs, turn the bar into a mini-skatepark and—of course—make a huge, gigantic mess.

And that’s what I did. I hosted this festival about five times total and managed to not get the bar sued or any DABC infractions.

“Basically, the only rule was ‘Don’t get us sued.'”

The first Mike Brown Fest was mostly skateboarding. “If you build it, they will come”—very true when it comes to dirty skaters. Tell them there’s a spot with beer, ramps and zero bust factor, and they’ll show. No waivers to fill out, no pads and only one broken arm—pretty good odds!

I decided to progress things for the next one, doing something I always wanted to do: have a pudding-wrestling match. I got a cheap kiddie pool, tons of pudding, decided to make it look like poo by adding Baby Ruth’s and corn and called it “Pooding Wrestling.”

Of course, my dumb ass just thought there would be a line to jump in. Didn’t happen, so I decided to offer up a $50 cash prize, which I took from the door money. Luckily, two brave women arose to the challenge and put on a great show. I jumped in at the end of The Fucktards’ set—man, once pudding dries up, you need like five showers to get it all off. The next day, the bar was closed. I was hungover and didn’t go clean up the mess, shirking the responsibility and passing it to The Fucktards’ bass player and another door guy who puked while hauling the kiddie pool to the dumpster.

“I decided to progress things for the next one, doing something I always wanted to do: have a pudding-wrestling match.”

Now that I had set a precedent with messes, I decided it was time to step up the Mike Brown Fest mess factor with something else I always wanted to do: a tomato show! I bought tons of tomatoes and resold them at the show to festival-goers for a dollar apiece so they they could throw tomatoes at my band while we played.

People would always throw stuff at us while The Fucktards would play. Like, even Urban Lounge bartenders would pass out mugs of sticky drinks to fans to chuck at us while we would play. I figured, “Fuck it, I might as well make some money off it.” Being the entrepreneur that I am, this turned out to be the case. I made more money off of selling tomatoes that night than I did off the door.

We quickly learned how much people like throwing tomatoes, how hard it is to play a set while getting constantly pelted and that tomatoes don’t always splatter and can leave bruises. I wore some old hockey gear that helped, but my midsection was thoroughly exposed. Our drummer tried to start a fight even though we all knew people were going to throw shit at us. I puked in the middle of the set.

It was great! I’d do another tomato show in a heartbeat. In fact, I wish I could just take tomatoes with me everywhere I go and just throw them at things.