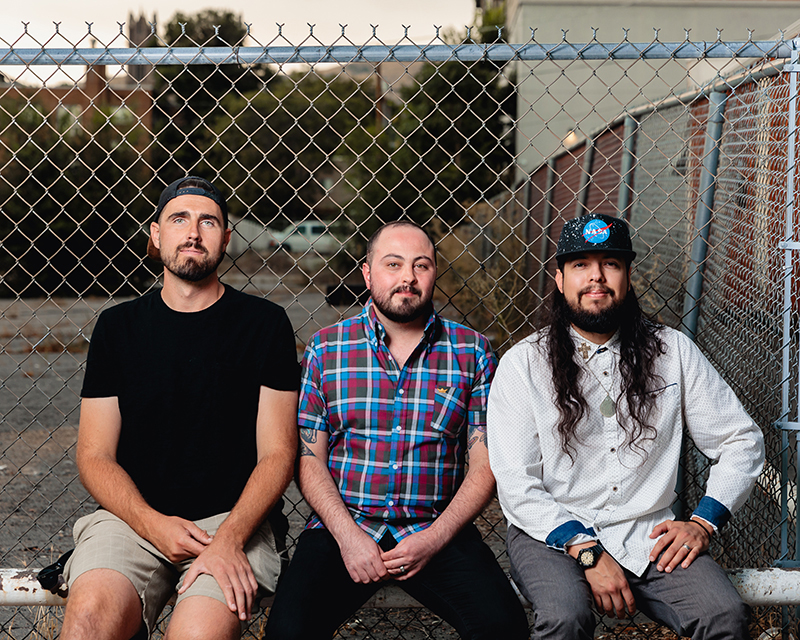 October’s Localized showcase turns to some of the city’s premier post-punk. Co-headlined by Alexander Ortega and Muzzle Tung with opener Corner Case, the groups take straight-ahead, poppy punk jams and turn them on their head with experimental vocal techniques, unique instrumentation and an overall approach that’s gleefully odd. SLUG Localized is $5 at Urban Lounge on Oct. 24 and is sponsored by Uinta Brewing, High West Distillery and Huge Brands.

Local musician and SLUG Editor Alexander Ortega has played in an array of bands over the years, but his current solo project is arguably his most adventurous yet. Led by Ortega on vocals and guitar, the group is rounded out by Nick Harris on bass and Camilo Torres (Trebuchet) on drums. The trio takes an experimental approach to their shared backgrounds and tastes in punk, metal and hardcore music, and Ortega adds a defining vocal characteristic by incorporating the techniques of Tuvan throat singing into his performances.

For Ortega, the gateway into throat singing came from the 1999 Sundance documentary Genghis Blues. The film follows American blues musician Paul Pena as he discovers the art of Tuvan throat singing, almost a precursory allegory for Ortega’s similar path a decade or so later. More important than the content of the film, however, was the companion sampler CD that became a favorite of Ortega and his father as the former grew up. Later on, when Ortega was in college, he came back to the throat singing music with a greater appreciation. Being a longtime fan of punk and metal music, Ortega was enticed by the expressive, visceral sounds he heard in the Tuvan tradition. “With what I was listening to, I contextualized it sonically and found some instructional videos on YouTube on how to do it,” he says. Specifically, he learned to emulate the kargyraa and sygyt styles, both of which are principally incorporated into the Ortega group’s music with sprinklings of some khoomei- and chylandyk-style singing.

“I think of it more on a physiological and corporeal level that I’m making the [throat singing] sounds.”

In short, the process of throat singing relies on accessing your false vocal chords (or “vestibular folds”) to produce multiple overtones at once, giving the vocals a distinctive power and grittiness. Still, this sound is only one of a litany of styles that Ortega’s group incorporates into their music. “Not all of it is just throat singing,” he says. “It’s more or less where I feel that it would lend the song synergy or some poetic nuance that might come across in an aural form.” Balancing multiple traditions is always tricky, and Ortega readily admits that he’s still a student trying to respectfully blend the worlds of music he knows. “I think of it more on a physiological and corporeal level that I’m making the [throat singing] sounds,” he says. “It’s more a pastiche of the recordings I’ve heard and I admire.”

After a few years as a solo artist and a brief Northwestern tour accompanied by Samuel Hanson, Ortega’s group went through a series of lineup changes before settling on the core trio a few years back. Torres states that he was immensely interested in Ortega’s unique style of writing: “It seemed perfect for me,” he says. “I come from a culturally diverse background as well, and it calls out to me to blend things together. I don’t feel like I have an allegiance to one type of music. This really pushed the envelope.” Harris and Ortega play together in local street punk outfit Filth Lords, and the same freedom that caught Torres’ eye enticed Harris: “Having a broad palette of musical styles and not feeling like I’m one sort of musician really helped fitting into this project,” he says.

“I don’t feel like I have an allegiance to one type of music. This really pushed the envelope.”

As these three musicians ventured into something of an unfamiliar territory together, there has been a process of learning to navigate this somewhat unorthodox sound. Aside from Ortega’s varying vocal inflections, the blend of punk sounds and blues structures into what Harris describes as “an acoustic power trio” is a combination that has come into its own over the years. “The songs are getting more refined,” says Torres. “[It’s] the distilling process—it gets better every time. Instead of sounding like a mix of different things, it’s starting to sound like its own defined thing.”

Specifically with Torres’ drumming—which blends his years-long history of hardcore performance with a stripped-back, brushes-led kit approach— the group feels more comfortable than ever with their interplay. “Camilo has a really unique style and is self-taught,” says Ortega, continuing that “Nick describes Camilo as a ‘groove’ kind of drummer. Also with that is something melodic and very stylistic that only Camilo has. Putting those into the context of using brushes really brought a lot of dynamic in the songs and helped temper some of my repetitive folk leanings.” Harris says that Torres’ input “just kind of opened up the landscape as far as what we can present to an audience. [I’m] Getting really comfortable with Camilo’s playing, getting more intuitive about where he’s gonna go with something. It lets me flow while Alex does all the things that Alex does like no one else.”

“Instead of sounding like a mix of different things, it’s starting to sound like its own defined thing.”

While access to Ortega and company’s music (save an older, solo Ortega EP) is currently reserved for those who have caught, or will catch a live show, the group are in the process of finishing their debut full-length. The first offering of this project comes in the form of a video made by University of Utah film school professor Kevin Hanson, due to be released sometime in October. Catch Alexander Ortega and company at Localized on Oct. 24, and keep an eye out for their upcoming album and music video by following Ortega’s Bandcamp.