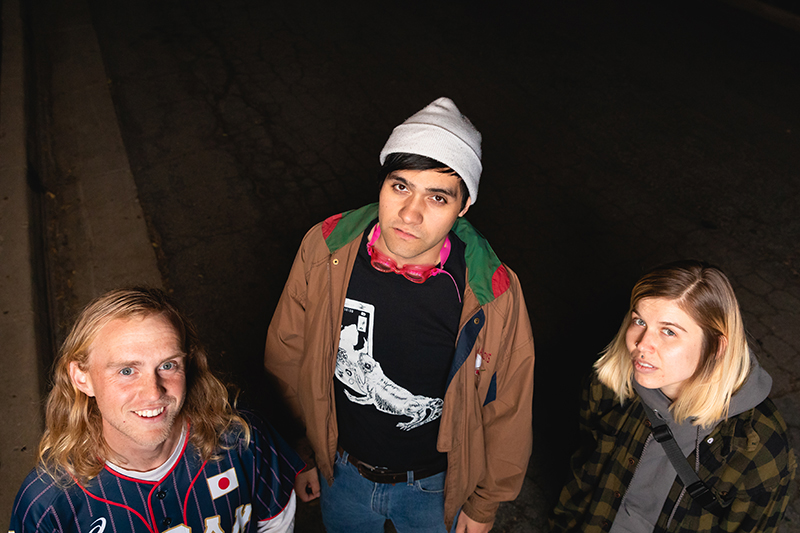 It’s December already?! Before you make those damn resolutions, catch Breakfast in Silence and Tayler Lacey with opener Rebel Rebel at the SLUG Localized showcase on Dec. 19 at Urban Lounge, a 21+ event sponsored by Huge Brands. At $5—you won’t regret it.

Is there such a thing as being “inspired?” What prompts people to create and push the limits of the abstract? I’ve been mulling around the idea that inspiration doesn’t exist when there’s factors of talent, dedication and motivation. Sure, you could say creating anything takes honest hard work, and that’s where one’s muse comes to light. The cunning band Breakfast in Silence-—consisting of Ash Bassett (guitar and vocals), Val Brown (drums and vocals) and Russ Wood (guitar)—without a doubt, prove what it means to have dedication, giving endless possibilities to their creative drive.

Breakfast in Silence’s first drummer, Andrew Maguire, began making music with Bassett in the project Cat Ghost Formerly Known As Ghost Cat. Then, the two started Knows Goes. They named themselves the night of their first and last show. Soon after, Maguire and Bassett aimed to form another band. They always admired Woods’ guitar skills “and his general goob-ness,” as Bassett jokes. Thus, Breakfast in Silence were born. “At first, we asked [Wood] to play bass, but realized ‘Who really needs a bass player?’ So, we opted to be a three-piece: two guitarists and a drummer,” Bassett says. Eventually, Maguire moved to Oklahoma to teach underprivileged kids, which is how Breakfast in Silence added Val Brown to the mix. “As huge admirers of Val’s creativity, we asked them to play with us,” Bassett says.

“It’s hard for me to look at people in the face when I sing, but I write this shit whether or not I share it.”

The band’s genre is a mixture of indie rock and soul punk. Bassett explains that “soul punk,” means they’re basically an emo band. “Soul punk was the genre my friend Keri Beth in Shit Dogma dubbed us. But honestly, what is emo? It has its roots with punk, right? It channels angst through ‘sad boi shit.’ I’m just a big ol’ sad boi,” Bassett says. Wood clarifies that it’s more engaging than the typical description of emo and/or indie: “Val has called us ‘deconstructive emotional yard-core,’ but soul punk will do in a pinch.”

With captivating and distinct lyrics, one would be curious to know the challenges that come with expressing yourself in such a vulnerable way, especially having an album titled It’s Hard To Be Open-Minded When You Wanna Die. Bassett writes the majority of the songs, and says it comes naturally to them. “Not to sound like an asshole, but the writing is pretty easy—it’s presenting the lyrics that’s hard,” Bassett says. Breakfast In Silence songs powerfully address topics like suicidal ideation, mental health and family dynamics. Likewise, the lyrics are more or less Bassett’s journal entries. “Poetry is the easiest way to express myself,” Bassett says. “Growing up, my parents read my journals, so I had to be clever and mask [the entries] with metaphors and analogies so they didn’t know what the fuck I was talking about. It’s hard for me to look at people in the face when I sing, but I write this shit whether or not I share it.”

“Not to sound like an asshole, but the writing is pretty easy—it’s presenting the lyrics that’s hard.”

Performing is a constant state of elation for the band. Brown admits to having a bit of stage fright, yet says that when they’re playing in sync, it becomes an ethereal type of high. Maybe that’s where the ideal inspiration comes from—when it’s shared and continually presented to the public. “It’s cathartic in a way that nothing else is,” says Wood. “Writing a song you are excited about, putting it out there, and playing a show where you see people enjoying the same thing you’re excited about. Performing and sharing your art with new listeners and show-goers is not personally validating, but an excellent way to make new friends and build a community that extends beyond the music.”

So, where does inspiration such as Breakfast In Silence’s come from? Is it purely based on personal experiences that individuals encounter? It can’t always be wholesome Fun with a capital “F.” Is inspiration, in fact, unexplainable? Wood says, “Musically, I’m striving to create something that doesn’t already exist in the world. It’s an attempt to create the perfect art piece, something you would lose your mind over if you experienced it second-hand.”

“Performing and sharing your art with new listeners and show-goers is not personally validating, but an excellent way to make new friends and build a community that extends beyond the music.”

Correspondingly, there must also be a staunch work ethic. Bassett compares the compulsion of creating to their nicotine addiction, since both require a consistency that they continually maintain. Breakfast in Silence, of course, strive for success. “The work ethic is, in part, because I want to tour—a lot, and write a lot,” Bassett says. It’s a fix. Although, is a fix enough? Well, that’s a subjective question that deserves a subjective answer. Regardless, Breakfast in Silence have changed my mind on what we call an obsession for passion and enjoyment. And fine, I do think inspiration does exist in this beautiful, chaotic world. However, only the cosmos can give us the exact explanation for it.

Breakfast in Silence will release a new album soon, and as Wood puts it, “It’s unlike any other album I’ve ever made or even heard.” Come hear for yourself at SLUG Localized on Dec. 19 at Urban Lounge. Doors open at 8 p.m., and music starts at 9 p.m.