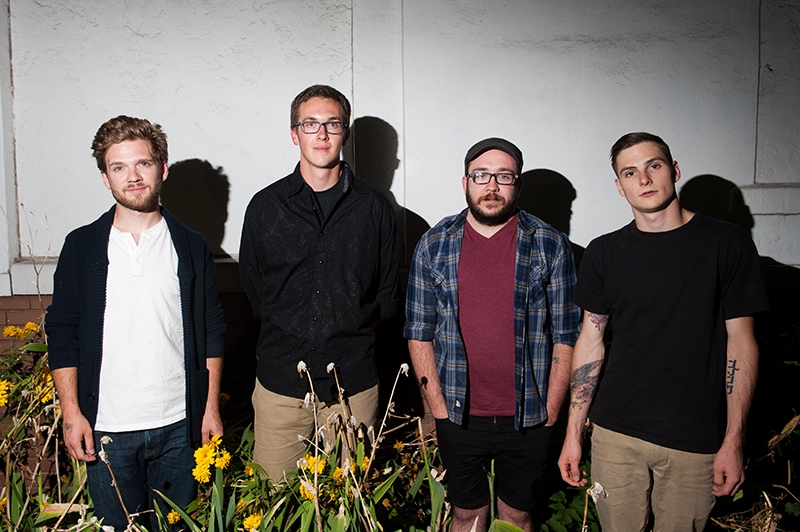 Urban Lounge will be hosting some of our salty city’s finest musicians on Oct. 10 for Localized, sponsored by Uinta Brewing Co., KRCL 90.9FM and Spilt Ink SLC. The evening will be kicking off with indie jams from Grass, followed by the dreamy, thoughtful rock of Strong Words and the introspective, spacey songs of Great Interstate. It’s only $5, so flip off your Netflix and head on over.

Andrew Goldring (guitar) wrote his first song at age 9 and has been working his ass off in the Salt Lake music scene ever since. Whether it’s playing shows or recording professional studio albums, his presence in the city has been a source of consistent care and positivity for years. Most recently, Great Interstate have been a depository for his thoughts, words and musical prowess. He is joined by Ken Vallejos (drums), Tate McCallum-Law (guitar) and Matt Morrison (bass), and these guys strive to be diplomatic, dynamic and—well—nice. McCallum-Law says with a laugh, “We’re almost a ‘dad band’ because we’re so nice to each other. When we get in the van together, we always take turns riding shotgun. There’s no ego.” Goldring adds, “We’re experienced—comfortable working with lots of different musical environments and not caught up in any idea of a scene we have to fit into. Hopefully, our music is a representation of that.”

Great Interstate began as a solo project for Goldring, and he had written and/or started recording most of the tracks before he decided to start jamming with others. “I ran into Tate at NoBrow one day, and he had two broken wrists, and I was like, ‘Want to play guitar in my band?’” says Goldring. Coming from backgrounds such as gyspy jazz, screamo, ska and cowboy space rock, the members effortlessly embraced their diversity and started making music together. “It’s so great working with like-minded people. We all want the same things. Everybody’s really into it—and for the right reasons,” says Vallejos. While Andrew was initially responsible for most of the music, the band is transitioning into a more synergetic process for writing. As Morrison says, “We all have the flexibility and open-mindedness to suggest new things to each other.” Goldring adds to this sentiment, saying,, “Writing collaboratively is more freeing for everyone.”

Self-described as a classic rock band with modern tones, Great Interstate are interested in creating textures and contrasting soundscapes. “I want the music to appeal to people who are into singer-songwriter stuff, but also to people who are into spacey rock or technical music,” says Goldring. “We take pride in having quiet quiets and loud louds.” Their first album, Inversion Songs, was defined by said contrasts, as well as drawn-out, ambient arrangements. As the band is working to be more collaborative, they’re also working on tightening up their sound for the upcoming release of their EP. The next songs are intended to be more concise, powerful and to-the-point than the previous songs. “Songwriting is the most important thing to me. I value crafting a song and having everybody add their own piece to it,” says Goldring.

In addition to the EP, Great Interstate are gearing up for their first tour in October. While traveling the Northwest, they’re hoping to make living out of a mini-van for a week as enjoyable as possible. When asked what makes a good tour, Goldring responded, “If one guy in your band is a disrespectful dick, then it’s going to be a bad time. You’ve got to be able to relate. We’re lucky to be on the same page. I mean, you know your band is solid when all the members can sing every word to Abbey Road.” Great Interstate believe that playing outside of Utah is a way to gain momentum and energy, as well as to build a base of friends all over the country. McCallum-Law says, “Even if you’re playing for six people in some random place in the Midwest, if at the end of the night, one guy is stoked on your set—it’s totally worth it.”

Great Interstate’s main goal is to make a lot of music and to play it, but they are a community-oriented group with their hearts invested in contributing to Salt Lake in a sincere way. Goldring says, “Our city is almost oversaturated with great bands, which is awesome. I want to see bands who can take themselves a little more seriously, with support from a stronger culture of people caring about music. I want to help do that not just for our band, but for all bands.” Goldring recently opened his own recording studio, The SoundCave, as a step in furthering local music. Although it was a vulnerable leap, and he may struggle to pay rent for a while, he has been able to provide invaluable, top-quality recording for numerous local bands, including Koala Temple and Strong Words—a process that he finds important and rewarding.

The maturity and generosity of this group is notable and will likely push them to succeed. You can follow their music releases and tour dates at greatinterstate.bandcamp.com, and be sure to catch one of their many upcoming shows in October—especially at SLUG’s Localized on Oct. 10.

Strong Words are a band for the working class. They’re honest, consistent, hardworking, and goddamnit, people like them.

When Cathy Foy was itching to get a band together, she knew what she was looking for in potential bandmates: kindness. She succeeded in finding the type of people whom she wouldn’t mind spending hours making music with—they’re cheery, positive and cute as fuck. (Seriously, though, Brian Lord’s got a fluffy beard, Jamie Richards has dimples, and Ryan Ross wears endearing Hawaiian shirts.) They’re an adorable, eclectic bunch, and their genuine friendliness and forward-thinking attitude is refreshing in the often selfish and competitive world of music performance. “Music is about participating in your community in the hopes that people will do the same for you,” says Foy.

Strong Words are passionate about Salt Lake’s music scene, and they’re hoping to contribute to making it better by offering a different perspective. “No offense to white, middle-class males who play in bands, but we would love to see more diversity,” Richards says. “We’re a girl-fronted band, and we think that’s important.” In the past, Foy has always played drums, which kept her in the background. This time around, she has taken the lead on guitar and vocals. “Being the lead person has totally taken me out of my comfort zone,” she says. “Is everyone having fun? Is this a positive experience for everyone? Before, I never thought about that shit.” Foy’s challenging of herself has led to music that is both thoughtful and fresh.

“I like to keep things easy and low key,” Foy says, when asked about Strong Words’ writing process. For her, low-key doesn’t equate to laziness—she writes at least one song a week and insists that the band keeps a regular practice schedule. “Tuesdays at 7:30!” Lord chimes in. They relax, drink a few beers and get right to it. Keeping a routine allows for both creativity and growth in their musicianship as they build on older songs in order to innovate the new. “We’re all work-oriented and keep our goals in mind,” Foy says, “but we like to have a good time together.” This is the first committed musical project for all members other than Foy, who has been killing it in Salt Lake bands for 12 years. Ross laughs and says, “The only time I’ve ever played onstage was in a Helena, Mont. junior high talent show.” Lord adds, “Yeah, I have some pretty sweet high school pop punk recordings on the Internet.” The virgin spirit of Strong Words adds to their eagerness and brings a sense of good-hearted vitality to their work.

The enjoyment and easygoing temperament of the band is complemented by the sobriety of Foy’s words and the tender, emotional place they come from. “My lyrics are dark and tend to take on a serious tone. Nothing I write is ever campy or fun—it’s always direct to my personal experiences,” Foy says and adds with a chuckle, “I’m not a depressed person or anything, but fair warning, the next album is very much a breakup album.” The band agrees vigorously that the words to their songs deserve to be under Foy’s reign. Lord adds, “Cathy’s lyrics make us sad, but in the best way.”

“We’ve never really talked [about] our band before this interview,” says Foy, chuckling again. Lord adds, “Cody Kirkland says we sound like Sonic Youth + Silversun Pickups – Silversun Pickups’ lyrics, so there’s that I guess.” For the most part, however, Strong Words aren’t drawing directly from any major influences or trying to fit into any niches. Their rock is precise and pensive—grungy and gripping. The hours of practice result in a tight, cohesive sound that allows for the emotional intensity to resonate. Richards says enthusiastically, “It’s so much more fun to play the songs when we can play them well.” Adding to the forward-thinking attitude, Foy says, “When I’m having the most fun in bands, it’s when things are moving forward. The least fun is when you’re not working on anything new. The whole point of playing with people is to be creative.”

As far as creativity goes, Strong Words are ahead of the game. You can expect a new album from them in the next couple months, and a music video for “Come Clean” will be released shortly. Directed by Kathryn Nelson, it includes a dog suit, roller skates and various other shenanigans. Additionally, the band is thinking about kicking off a tour quite soon. “We’ve spent the last year getting to know each other, but the next step is to play out of town,” says Foy. Keep an eye out for these upcoming projects, and support their impressive work ethic by stopping by one of the several shows a month they play, including SLUG’s Localized on Oct. 10 at Urban Lounge and/or download their first album at strongwords.bandcamp.com.