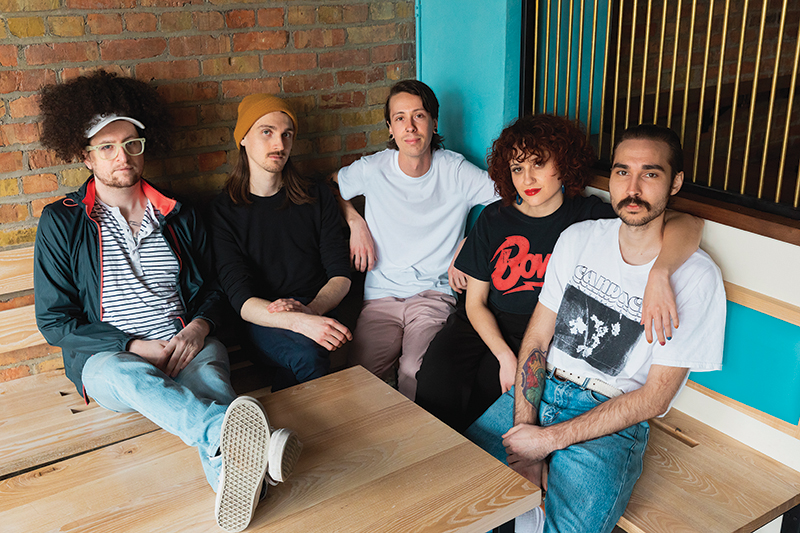 This May installment of SLUG Magazine’s Localized highlights an eclectic range of bands with a comparably unique range of history in Salt Lake City. Gracing the stage will be bands, Martian Cult, Umbels and Coolaid. The night will be filled with pop, psych and synth-driven post-punk themes that will have you bouncing from one musical land to another. Enjoy yourself on Thursday, May 16, for SLUG Localized at Urban Lounge, sponsored by High West, 90.9 FM KRCL and Spilt Ink SLC.

Followed by the remnants of former local band Daisy and the Moonshines, vocalist Jared Asplund and bassist Elowyn LaPointe were led down a path of synth-heavy music and dystopian storytelling to form what is now known as Martian Cult. LaPointe and Asplund are accompanied on this journey by guitarist Justin Richardson from the band Terra Cotta, synth player Derek Clark and drummer Blair Draper (also known as Milo, depending on the day).

This group forms a unique sound that incites a sense of adventure, nostalgia and frantic longing for a tragic love story we don’t know yet. Experiencing their music gives the same spike of adrenaline brought on by playing a game of Zelda or Fallout 76. As someone who has played many shows alongside Martian Cult and who is their friend (if they’ll have me), I wouldn’t hype them up if I didn’t mean it from an objective standpoint—I don’t think they would stand for that bullshit.

Like many bands, Martian Cult struggle with the definition of what their “sound” is. This elicits an internal conflict, as Asplund says, “You kinda go back and forth between being pigeonholed or having a place to fit.” Cheater’s Wave has a distinct sound that’s hard to put a finger on. It has rock n’ roll elements that Richardson provides with lead guitar that draws from garage and post-punk styles. The band also features a severely funky bass with a heavy lean on the synth for the melody, which provides an ominous/spooky vibe. Asplund almost plays a storyteller role as opposed to a singer. Songs like “Lonely Android” tell stories of a dystopian wasteland with political and social references that sit you down and buckle you up for a potential catastrophe in our future. Imagine a robot going through a breakup all the while trying to save the earth and human race from extinction. This is the weight of Cheater’s Wave.

“It is a totally different lifestyle with waking up and having to be in a different city, and you get to see friends that you only see a few times a year when you tour.”

As Daisy and the Moonshines decided to call it good, Asplund aspired to form a band with more defined objectives. “It had to do with wanting to start a band that was a little bit more regimented and strict with a purpose of touring,” Asplund says. However, there is residual love and appreciation for Daisy. They all remain close friends. “[Playing in Daisy] was really cool and really fun,” LaPointe says. “We played great shows.” Daisy provided LaPointe and Asplund a springboard that helped corner exactly what they want in a band—touring.

As has nearly every band in our generation, we’ve watched movies such as Almost Famous that romanticize touring. And for those of us who actually had to fork out the money, time and energy to pile into a van and survive off of Del Taco for a week, it’s easy for tour to discourage or break bands. Martian Cult have a different tone—and they clearly love it, seeing as how they’ve trekked around the country five times in the span of two-and-a-half years. Asplund says, “It is a totally different lifestyle with waking up and having to be in a different city, and you get to see friends that you only see a few times a year when you tour.”

“The intention is to make the songs easier to sing along to. We want to make it more universal.”

Martian Cult’s love for touring is more about the experiences and relationships cultivated while being able to see eye to eye with other touring bands. Hospitality is a core value for Martian Cult, and they see touring as more than going out there into the unknown—it’s also about what you can bring back home. Asplund says, “The most important thing with touring is getting bands to want to come here … It is really rewarding to have bands stay with you and take care of them.” This has proven to be the case, as bands like Ice Cream and Spooky Mansion, both from San Francisco, come to SLC and stay with Martian Cult often.

After this solid of run of back-to-back tours for Cheater’s Wave—which came out in 2017—Martian Cult has refocused on taking a different direction with a new album. “Simmer Down,” a single released late 2018, is the first step toward a different kind of sound. “The intention is to make the songs easier to sing along to,” Draper says. “We want to make it more universal.”

As Cheater’s Wave was more of a story to tell, the upcoming album will be much more personal for Asplund. Keep an eye and ear out for the next adventure Martian Cult embark on, whether that is the next tour or new album. In the meantime, you can see what they have to offer now at May’s Localized at Urban Lounge. You can find their music on Spotify and keep up on Instagram @martiancult.