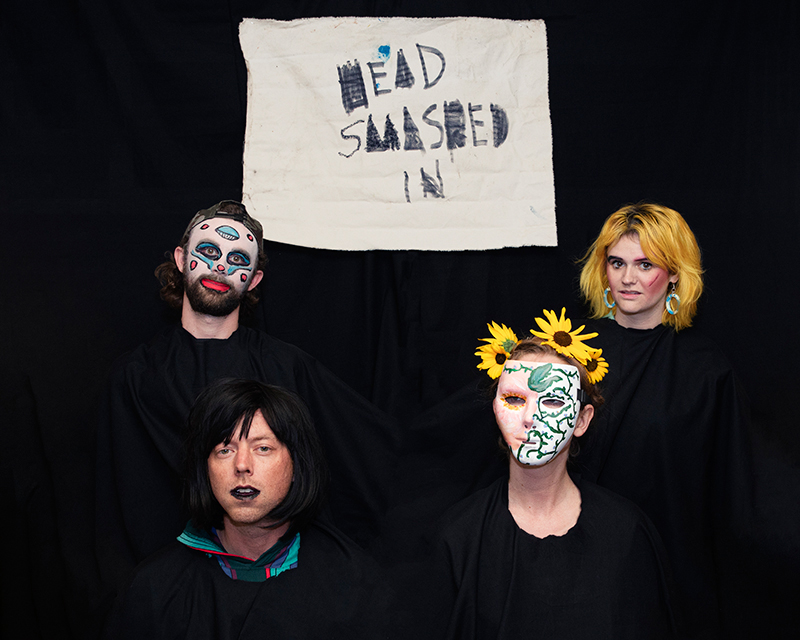 October’s Localized showcase turns to some of the city’s premier post-punk. Co-headlined by Alexander Ortega and Muzzle Tung with opener Corner Case, the groups take straight-ahead, poppy punk jams and turn them on their head with experimental vocal techniques, unique instrumentation and an overall approach that’s gleefully odd. SLUG Localized is $5 at Urban Lounge on Oct. 24 and is sponsored by Uinta Brewing, High West Distillery and Huge Brands.

Right now, Muzzle Tung consists of synthesizer player and vocalist Geoffrey Leonard, guitarist and vocalist Karley Parker, bassist Dyana Durfee and drummer Paul Whisman. Since the group’s inception, though, there has been a rotating cast of members. This current group feels especially strong, a solid quartet of artists with varying skill sets and musical backgrounds. With a close-knit, nearly familial atmosphere between them (Durfee and Whisman jokingly call Leonard and Parker their band mom and dad), Muzzle Tung craft a singular brand of pop music that’s both strange and inviting.

Leonard is the sole founding member of Muzzle Tung, as well as the primary songwriter, but the group is just as much about their additional members’ input as they are the core compositions. “I ‘produce’ the songs,” Leonard says. “I write the melodies and I come up with the tempo and stuff. I create these skeletons and I bring people in to play on it.” With the additions of Parker, Durfee and Whisman, Muzzle Tung mold these skeletons into full-fledged pop oddities, ranging in style from quasi-country bounces to the darkly comic and gothic synth pop found on Muzzle Tung’s debut, Administration. “There’s a lot of variety,” says Parker, noting a decidedly loose approach to the writing and playing.

“Sometimes the timing is kind of fucked up, but then, if you find something that works well—even if the timing’s not correct—if you repeat it enough times, it might seem alright by the end.”

Durfee qualifies Leonard’s classification of his songs as “skeletons.” “Geoff’s songwriting evokes a lot of mood,” she says. “It’s not like [he] brings ‘Twinkle, Twinkle Little Star’ and Paul puts some metal drums under it and that’s a song. The songs themselves, even though we call them skeletal, they still got the skin on them, and we put them muscles in.” While this has the potential to lead to an almost rambling, kitchen-sink approach to music, the group and their other collaborators thrive in this chaos. “[He’s] like doctor Frankenstein,” says Whisman of Leonard’s ability to assemble the disparate parts into a musical whole.

This rejection of rigidity is present both in the underlying song structures and the quartet’s realizations of Leonard’s “skeletons.” As a songwriter, Leonard tends almost subconsciously to stray away from convention, going with his gut rather than taking a formulaic approach. “I feel like there’s notes that can carry on until your done expressing yourself,” he says. “Sometimes the timing is kind of fucked up, but then, if you find something that works well-—even if the timing’s not correct-—if you repeat it enough times, it might seem alright by the end.” Rather than present the daunting challenge to the band of trying to maneuver around  jagged, atypical rhythms, they revel in a collectivist approach. “I just know it, and I feel that,” Parker says of the experimental musical elements. “We have the energy or feeling behind us, and we all lock in.”

“[Muzzle Tung is] all very much Geoff and Karley reaching out and working with other people and getting cool things out of people.”

Part of the group’s sonic identity comes from Whisman, the newest member of the band. His background in metal bands might seem a bit contrary to Muzzle Tung’s quirky avant-pop, but the clash is a benefit rather than a hindrance. “Where we’re at right now is really unique because of [Whisman’s] metal background,” says Leonard. “We’ve never had a metal drummer before. He adds this really unique flair.” In Durfee’s eyes, some of the cause of this lies in the strength of Leonard’s songwriting, as well as his and Parker’s egalitarian approach to leading Muzzle Tung: “Something that’s really cool about working with [Leonard and Parker] is that [they] both seem really enthused and excited about what other people bring to the table, regardless of what that is,” she says.

In 2016, Muzle Tung (then just Leonard and local musician Michael Biggs) released Administration, the group’s only full-length to date. A second album, titled Gannet and featuring the current lineup save Whisman, is completed and tentatively set to be released in early 2020. Before this however, the group will roll out a six-part web series that, in Leonard’s words, is “episodic—part narrative and part music video.” While Leonard is the primary director of the web series, the end product reflects the collaborative spirit at the heart of Muzzle Tung. “Everything from visuals to any sort of media that’s released around [the album], it’s all very much Geoff and Karley reaching out and working with other people and getting cool things out of people,” says Durfee.

Be sure to catch Muzzle Tung at SLUG’s October Localized showcase at Urban Lounge on Oct. 24, and follow the group on Facebook and Bandcamp for updates about the upcoming web series and album.