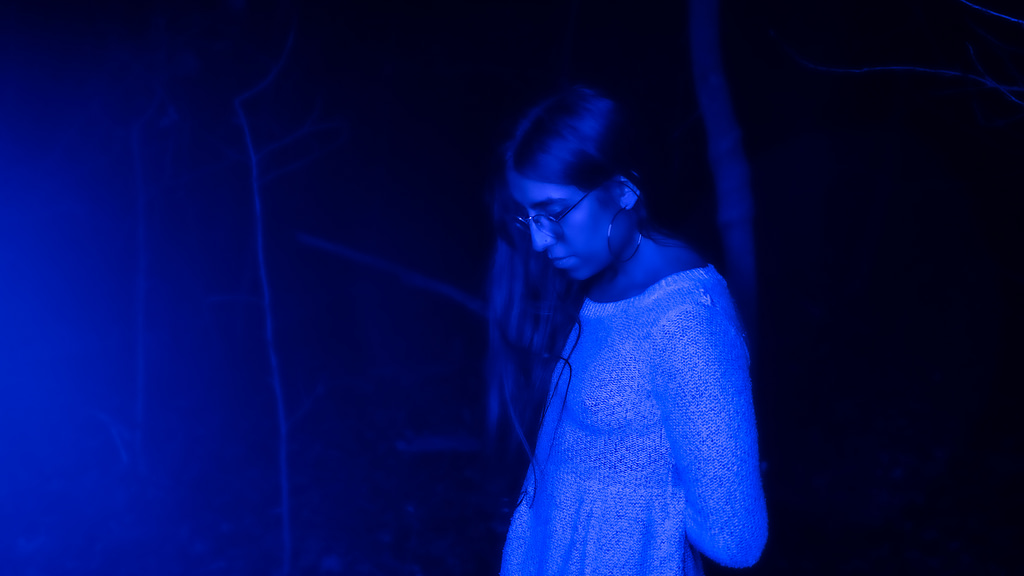 Finding the “And” of a Musical World: An Interview with Rachika Nayar

For Rachika Nayar, the key to her artistic life lay in the space between, and the first step forward was to reach outside of traditional methods of music-making. “Both instrumental playing and digital production felt limited to me in expressing only singular facets of my emotional life,” she says. “So I eventually began combining them, mutating my guitar playing with particular electronic methods. In that way, experimental and ambient feel not only like homes, but also like places where I can begin to meld my different sides together or start deconstructing genre boundaries.” This limitlessness is strewn across Nayar’s astounding debut album, Our Hands Against the Dusk. Full of ecstatic harmonies and fragmented choral paeans to the stars and skies, the album explores Nayar’s desired liminality while always privileging music’s ability to affect on an immediate, corporeal level.

Nayar’s inventive blend of acoustics and electronics provides the album with its defining portrait, from the stuttering and tremoring guitar loop that jolts the album open onward. “I like when electronic music feels organic,” says Nayar. “I think more ‘pop’ genres like folk or emo often deal with the realities of the more immediate world, while ambient and experimental kinda reside more in the abstracted realms of the pre-verbal or subconscious, or even spiritual.” Much of the music on Hands Against the Dusk floats in this inter-terrestrial space, using elements of each sonic touchstone (pop’s steady rhythmic motifs, experimental music’s willingness to paint outside the lines; the bleeding heart of emo against ambient’s love of blurred figures and suggestion) as ports from which Nayar’s explorations depart. “I like using tools from both ’cuz I like moving between worlds, or seeing what emerges when different worlds touch,” she says.

“Experimental and ambient feel not only like homes, but also like places where I can begin to meld my different sides together or start deconstructing genre boundaries.”

Nayar furthers the mash of these sonic influences in conceptual approach to her art, a musical outlook that embraces change and the pleasure of lingering in intermittent states. For all its electroacoustic sculpting and dense synthesis, Our Hands Against the Dusk exudes exactly the type emotional holism that drove Nayar to look outside of traditional musical practices: “Music for me has always been about rendering the extremities of my emotional life and experiences—connecting to my innermost wounds and most burning ecstasies, and then connecting that to some greater human thread or forces,” she says.

The pursuit of this otherworldly force inherently involves a breaking down of boundaries, borders, binaries. “Single stories or frameworks or tidy conclusions always feel really insufficient to me,” Nayar says. “I’m always interested in the seams, where a value system fails to represent or organize reality and breaks down.” In her music, the sonic representation of such a feeling comes from the opalescent blend of the physical and the ephemeral in her music: the tremble of her digitally affected guitar strings, the way the synthesizer swells on tracks such as “Marigolds & Tuslsi” and “A Burning Plain” resemble the unhurried sway of sea sponges and underwater anemone, the passage from one exuberant harmonic expanse to another found in each piece.

The album’s lengthy closing tracks, “Aurobindo” and “No Future,” stretch this multifaced exploration out like putty, relishing in the slow, steady churn from digital-guitar ecstasy to a cold, trebly synthesizer sheen, from lush string lilts to popcorn-like electronic glitches to the sound of a piano elegy reverberating against tin walls. Nayar recalls the specific influence of Brian Eno’s electronic realization of Pachelbel’s “Canon in D,” where the former composer expands the metronomic droll of the original piece through time warps and tape-loop layering, an effect Nayar describes as an “explosion” past the piece’s conventional limits. “That’s how I think of mutating my guitar lines and sending it through these layers of recombination,” she says. “It’s like putting it through a prism; exploring a single idea through all these multiplying perspectives [and] seeing one thing in hundreds of its different facets and selves.”

“Music for me has always been about rendering the extremities of my emotional life and experiences.”

If her creation process is a matter of sweeping up the known, Nayar describes the target zone of her music as “the feeling of, ‘something has opened up, but I can’t name what’;” a space of expansion and redefinition, where the distinct pieces of her influences and approaches merge into each other the way stacked scoops of different ice creams melt into a soup of novel flavors. “I think that’s the most beautiful feeling—that feeling of transformative precipice and the unknown,” she says. “I think a lot of queer people esp[ecially] can relate to this feeling—destroying, rebuilding anew and chang[ing] obviously ha[ve] a lot of connections in my heart to my gender transformations in life … which for me has always been about imagining alternative, freer ways of being in the world.”

In its embrace of artistic contradictions and the blurry space that lies outside of any one “thing,” Our Hands Against the Dusk does envision a more liberated reality full of flights of fancy and imagination. But the music still retains an earthiness—a grounding quality found in the electric guitar’s elasticity, Nayar’s echoing vocal passages, the album-wide adoption of impressionistic harmonies and textures. If the world Nayar paints here feels like a cosmic cousin to our own, the pieces that form the construction come from the recognizable; her tools’ familiar grasp allows us to hold on to the invisible railing as Rachika Nayar carries us farther and farther outward.