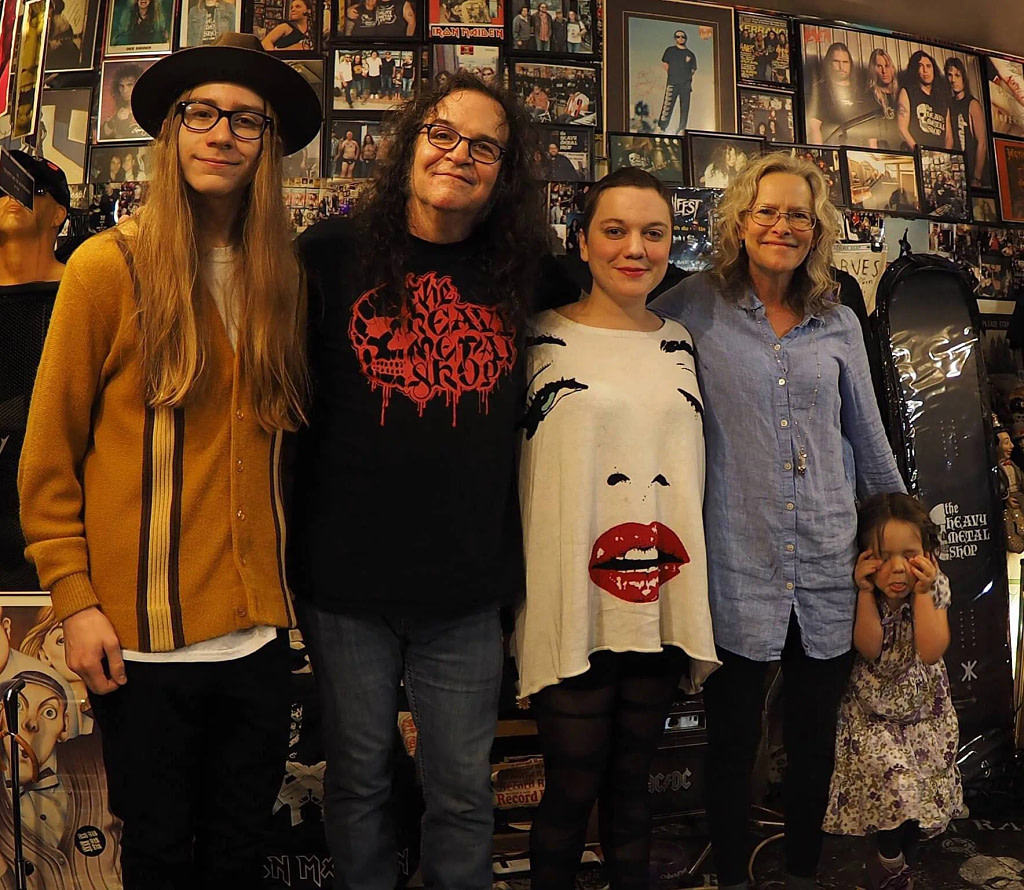 On the afternoon of March 5, a pillar of SLC’s local music scene, The Heavy Metal Shop, suddenly lost co-owner Angie Kirk to leukemia. The shop, owned by Angie and Kevin Kirk, opened its doors in 1987 and has been “peddlin’ evil” ever since. Kevin and Angie’s 40-year relationship comprises 35 years together at The Heavy Metal Shop, a time during which Angie left her legacy on the local metal community and beyond. “[She was] the most compassionate and kind person that I have ever known,” says Kevin, “the most beautiful woman inside and out.”

Alongside her 32-year career as a court stenographer (she retired in 2017), Angie supported Kevin and the shop in any way she could. “She loved that I was doing something that I love,” says Kevin. “She also had her office in The Heavy Metal Shop, so when she wasn’t transcribing she would be out in the shop helping or just being with me and our sons, Kelly and Joey … I think her encouragement for me to follow my dreams and be[ing] right there beside me all the way helped shape the shop—the shop really is about the love of music, love of family and love of friends.”

“[Angie was] the most compassionate and kind person that I have ever known … the most beautiful woman inside and out.”

Kevin fondly remembers Angie’s eclectic music tastes, noting that, “You might assume something mellow, and she [does] love classical piano music. But, more often than not, she would be blaring Black Flag, DWARVES or the Lunachicks in her car. One of her all-time favorites is Nick Cave. She loved The Carpenters, too—her first concert!” Beginning with their first concert together (The Police at The Salt Palace) and over her years alongside Kevin at The Heavy Metal Shop, Angie befriended a number of the talented musicians who proliferated in the shop’s orbit, among them The Mastersons, Sammy Brue and singer-songwriter Fernando Viconte. Kevin recalls an especially notable moment when Viconte played a show at the shop and performed his 2017 track “Beautiful” at Angie’s request.

On top of these interactions, Angie’s influence and light extend far past stories from the shop. In the couple’s previous home in the Avenues, Angie made supporting the musician community a top priority. “So many [musicians] stayed at our home rather than a hotel,” says Kevin. “Angie would cook breakfast in the middle of the night and make everyone feel so welcome—the most kind host … She truly cared about children, all people, the environment [and] animals.” Whether hanging with Chris Cornell and Matt Cameron from Soundgarden backstage at a 1989 show or being serenaded by Alice Cooper with a rendition of The Rolling Stones’ “Angie,” the musicians she encountered always showed love, respect and admiration for Angie Kirk.

“She truly cared about children, all people, the environment [and] animals.”

Soon before Angie’s death, the couple lost this house in the Avenues, their home for more than 20 years. “We had just started raising our two grandchildren, [and] soon after that we lost our son Joey,” says Kevin. “Angie and I were hoping to get back into another home that we own to raise our grandchildren in.” At this time, the Kirk family is requesting support from the community to provide financial relief to Kevin Kirk and their two grandchildren, as well as help realize Angie’s goals, through a community GoFundMe. “Kevin, Angie and their family have been constant sources of love and support for the music community in SLC and beyond. It’s time for us to send that love right back to them,” says Angel Damron, organizer of Kevin’s GoFundMe campaign. Any amount of donation will help ease the burdens Kevin and the Kirk family are facing right now.

Support the Kirk family’s GoFundMe here, and support the Heavy Metal Shop by shopping on their website, heavymetalshop.com, or visiting the store at 63 Exchange Place in Salt Lake City.

SLUG‘s April Localized Showcase will be a benefit concert in support of Kevin Kirk and The Heavy Metal Shop, featuring In Your Grave, Anonymous and Suffocater at Urban Lounge on Friday, April 15. Buy tickets here.