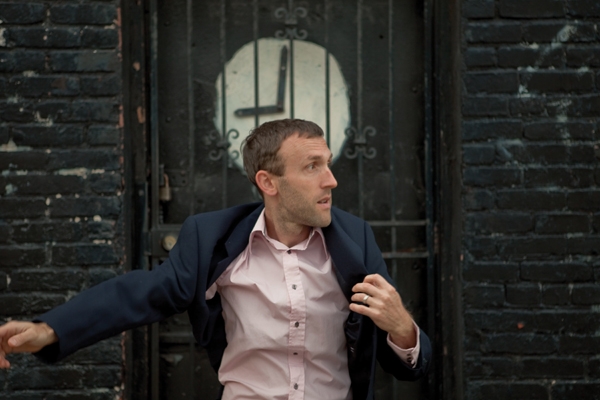 RJD2: No Rest For the Wicked Cool

The first time I heard RJD2 (RJ Krohn), I was at a party for the radio station where I worked as a DJ, and I wasn’t wearing any pants.  The soon-to-be-ridiculously-ubiquitous single “Ghostwriter” off his Deadringer LP came over the speakers through the crowd of pantsless folk with its infectious horn lines and I could not cease my boxered booty from shaking.  Two solo albums and numerous other projects later, RJ is known for his versatile production and collaboration with an army of hip hop’s elite.  After going in a new, more self-reliant direction in 2007 with his last release, The Third Hand, he’s blasting back onto the scene with his newest, The Colossus.  RJ found some time in his busy schedule to talk with SLUG about how he does what he does.

SLUG: You just established your own label, RJ’s Electrical Connections. What was the most difficult part of that process?
RJD2: Locking down the distribution, because I had to coordinate with more than one company, both inside and outside of America. It’s manageable, you get it done and it’s done.

SLUG: Do you have any immediate plans to sign new or current artists to Electrical Connections?
RJD2: The point of the thing for me was primarily to be able to release music that I do on my own terms and on my own time schedule.  I am really not eager to be anybody’s boss.  The reason I did this in the first place was to escape that dynamic. The way things are going in the industry, they’re moving toward artists doing things that they find sustainable on their own terms. In the future, if there isn’t going be enough money generated for overhead, for labels, then let me get on board, whatever that’s going to look like. I don’t want to get left behind.

SLUG: It sounds like the last year has been busy for you, finishing your fourth LP and starting a label. Has it been difficult to balance your life as an artist and as a label head with your personal life?
RJD2: It’s a challenge, but I love it. I’ve already got six videos in the works, I got two of the remixes back, there are going to be four or five remixes for the record.  I take this snapshot and I look at where I was a month before the release of The Third Hand and I feel much better.  I mean, we didn’t even plan a video, I basically had to call in a favor to get a treatment for a video and that was only done three months after the record was out.

SLUG: For The Third Hand, you toured with a band. What approach will you be taking for touring behind The Colossus?
RJD2: What I realized after doing that first band tour was that there are a lot of really cool aspects of the show I do on my own that I could incorporate. In my 2008 tour, about a quarter to a third of the show was just me doing what I do with turntables and a sampler and then it would ebb and flow in and out of the band dynamic. That’s going to be the format for this tour.

SLUG: You got your start DJing before moving more into hip hop. Do you still enjoy playing long, danceable sets?
RJD2: Yeah, especially this year. I’ll look for two-hour sets and do an hour centered around what I do, then an hour of more traditional DJing, other peoples’ records.  It’s a refreshing reminder of what really sucked me into DJing in the first place.

SLUG: The new album is like a mix of the completely new direction you did for The Third Hand and your earlier albums. Upbeat pop songs that show off your songwriting ability like “Walk With Me” right next to old-school-sounding instrumentals like “Tin Flower.” Was that the idea?
RJD2: There were two overarching themes for this record.  For The Third Hand, one of the goals was for me to go as far as I could by myself. I wasn’t going to hire any parts out.  I thought it would be fun to do a record that was the opposite of that: do as much collaboration with other people as I could.  The other one was to inhabit the working methodologies that I had used over the years, but do it with a modern eye to songwriting.  With the sample-based stuff, it was to see what would I do now in that format?  Also, I wanted to do some live stuff, some stuff that I wrote for other singers and some stuff that I wrote for myself.

SLUG: You have been known for your vintage-sounding samples. Tell us about how that happens.
RJD2: Nine times out of ten, I just like the engineering aesthetics of a record from 1969 more than I like something from 2009.  It’s a fine line because what I don’t want to do is to fall into some kind of imitation, revivalist thing.

SLUG: We  just got done doing SLUG’s Top 5s of 2009, can I ask you if you have a few releases from the last year that come immediately to your mind as favorites?
RJD2: Oh man, the way that music works now is so thoroughly overwhelming for me.  There’s so much coming out.  The first one that comes to mind is the Mastodon album, also the Foreign Exchange album.

SLUG: What’s next for RJD2?
RJD2: I’m hoping to take a little time off.  After this tour is done, I need a little breather.  I’ve taken one vacation in the last eight years.

The Colossus will be released on Electrical Connections on Jan. 19. The record features great beats on “Let There Be Horns” and “The Stranger,” and ethereal tracks such as “The Shining Path” featuring Phonte of Little Brother and The Foreign Exchange. A word of caution when the rhythm hits you, may you have recently misplaced your pants.