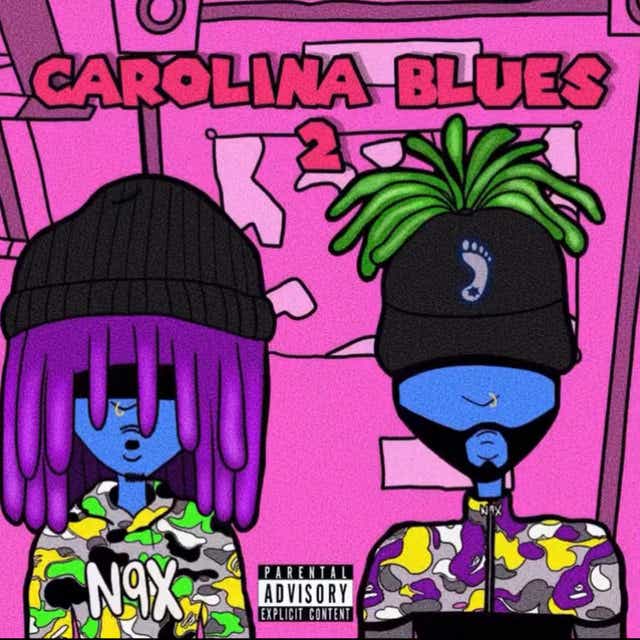 Local rap duo Nostalgic90s are back with Carolina Blues 2. The album is a showcase of the pair’s vast knowledge of hip-hop and rap. Clean and polished, Carolina Blues 2 is an easy listen and is sure to bring the hype to any local house party.

Nostalgic90s have a genre that’s hard to define. The duo is so knowledgeable about hip-hop and rap that they can easily employ the use of old and new styles and techniques. Somehow, the group is able to create some of the grimiest, most growling raps this reviewer has heard locally, while in the next moment they can open the song up and create a pop-like anthem that repeats in your head for days.

“TARH33L NAT!ON, Pt. 2” starts with a grim, Memphis-rap sound before heading into a more mainstream hook and chorus. “Never out of touch, everything is mine,” Nostalgic90s rap, quickly blowing themselves out of the cool, dark water of grimey rap into the airy light of sing-song vocals. With an obvious knack for experimentation, Nostalgic90s often combine different rap elements together, taking the listener on an exciting roller coaster through ’90s hip-hop, early trap and modern sounds.

The beats on Carolina Blues 2 are all fire. “M3DUSA” possesses a particularly good instrumental, using flutes that bring around memories of 2019 Metro Boomin, TM88 and even Pi’erre Bourne. The track is hyphy and energetic, starting with a Super Mario Bros. sample that gets chopped and screwed into the track’s main layers. Melodic and polished-sounding, the beats on Carolina Blues 2 are perfectly paired with the vocalist’s versatile delivery like fine wine and cheese, or a backwoods and a boombox. Be sure to keep on the lookout for more releases by Nostalgic90s in the future. –Taylor Hartman