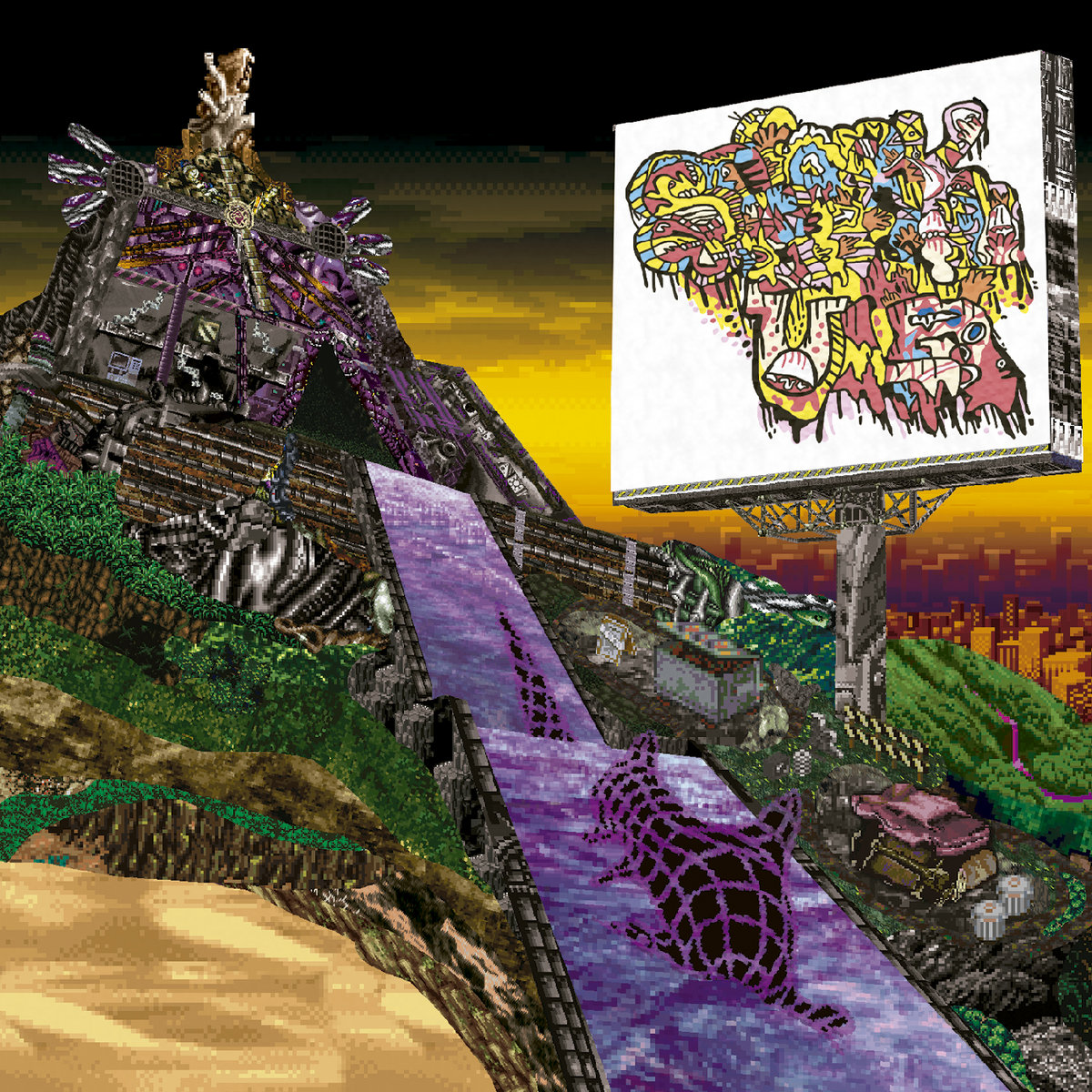 Take Caution on the Beach—though no less loose or unhinged than its predecessor—feels like a refinement of the style Chicago-based musicians Sharkula (Brian Wharton) and Mukqs (Max Allison) teased out on their first collaborative release, 2019’s Prune City. The MC (Sharkula) and the producer (Mukqs) both possess a style awash in eccentricity to the point of absurdity, and the combination of the two makes for outsider hip-hop unlike most. Mukqs’ production sputters and glitches through a web of lo-fidelity synthesizers and treats the rhythmic grid like a loose suggestion, his samples and loops warping and stretching between and beyond bar lines.

Sharkula carries even less regard for form—musical, lyrical or otherwise. His rhymes tumble through the music with a self-defined flow, and his rapid-fire jumps between topics and points of view negate easy (or any) narrative cohesion. Certainly, there are moments where the artist’s self-defined concepts, rules and boundaries showcase some head-scratching brilliance through their winding free associations. One particularly attention-grabbing phrase from “I Paint Like a Painter” illustrates the typical mode of connection within which Sharkula operates: “People that play games always get played like Hasbro / Hungry,  hungry hippo / Donkey Kong / My hammer is long / No time to play / Stay or get slayed.” Eisenstein could never.

Take Caution on the Beach contains so many of these double-take-worthy runs that I spent a few listens simply gawking in astonishment—it’s hard not be mesmerized and stupefied by an MC who bluntly asks, “God, does this make sense?” between an isolated shout of “light bulb” and the stern declaration, “If you wanna clean your butt, you better rinse thorough.” Here and elsewhere, Mukqs plays under his collaborator with an attuned and delicate ear, dropping the song’s pointillistic beat into a sinister synth bass riff just as Sharkula spits out “thorough.” An honest interpretation of this album could read as a recitation of the countless (countless) quotables and one-liners alongside a running log of every time Allison’s sonic patchwork elicits a smirk, a chuckle or joyous confoundment from its listeners.

But like many artists who wield humor to their advantage, over-infatuation with the duo’s shared oddity sidelines the album’s sense of confidence and its sincere belief in its atypicality. Within hosts of playful boasts and abstract poetics, Take Caution on the Beach takes a few decided stances of warm good will—Sharkula loves clean eating, romance and the City of Chicago, and he hates the coronavirus, abuse, public masturbation and shit. But more than anything, Sharkula stands for being yourself, loving what you do and being free. With its twanging guitars and major-key ambience,  “Do You Like Country Music?” dives deepest into full sentimentality. Atop rollicking, nostalgic harmonies, Sharkula presents one of his finest mergers of surrealism and radical self-love: “Life is [a] ton of turmoil / Roll out the royal carpet / Moonwalk in mud / Who cares / I’m just tryna live, I’m tryna breath.”

More than presenting this life-affirming sense of self-esteem through Sharkula’s lyrics, though, Take Caution on the Beach is itself a document of the healing powers carried by unrestricted artistic joy. At the end of “I’m a Workhorse (Stay Strong),” Mukqs’ beat seems to bottom out from under Sharkula in the middle of a verse. “Hey …,” the MC questions, erupting into laughter and shouting “Fuck it, I don’t know!” Allison and (presumably) fellow Hausu Mountain co-founder Doug Kaplan let loose a barrage of affirmative cheers and “woots,” providing a clear view into the palpable excitement of the recording session. These ten seconds make concrete what the rest of the album illustrates in blurred shades; they show the wondrous effects of a creative process that lovingly embraces goofiness and sincerity in equal measure. –Audrey Lockie