SLUG Mag Soundwaves
Episode #392 – Homephone
00:00 / 17:29
Spotify Stitcher
RSS Feed
Share
Link
Embed
Listening to experts like Eva’s Charlie Perry walk you through the culinary tapestry of their featured cuisine is one of the most enjoyable parts of Savory Salt Lake. The way words like “grated Manchego cheese” or “braised beef shoulder” roll off their tongue betray the reverence that these chefs have toward their product.

Savory Salt Lake: Put It in Your Mouth and Squeeze 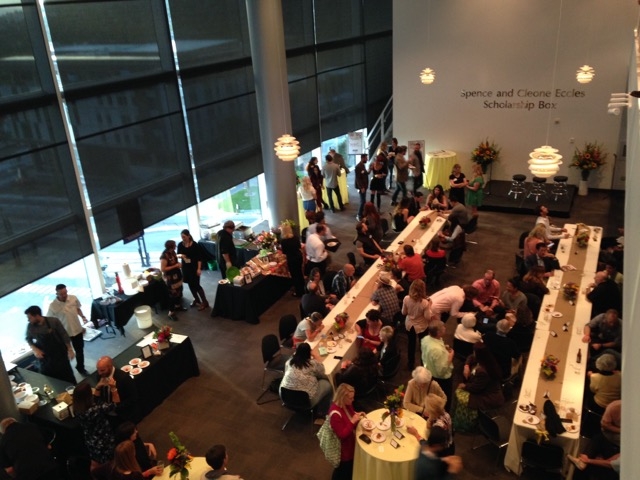 Savory Salt Lake is a showcase of SLC’s diverse and delicious foods. Photo: Alex Springer
Listening to experts like Eva’s Charlie Perry walk you through the culinary tapestry of their featured cuisine is one of the most enjoyable parts of Savory Salt Lake. The way words like “grated Manchego cheese” or “braised beef shoulder” roll off their tongue betray the reverence that these chefs have toward their product. It also offers ample opportunity to remind diners that each bite of food is an experiment in sensuality. For example, the folks at Riverhorse on Main had only one bit of direction as they presented attendees with a fresh fig, artfully skewered with a pipette full of strawberry and Sitka spruce syrup: Put it in your mouth and squeeze.
As Savory Salt Lake has grown larger with each year, tonight’s event was held in the spacious Tower at Rice Eccles. Enjoying such a beautiful view of Salt Lake City while being offered such a wide variety of the city’s most delicious food was enough to remind those in attendance that our fair city has a lot to offer to those who appreciate thoughtful and creative eating. While the point of the event is to celebrate the gastronomic geniuses that call the Wasatch Front home, let’s not forget the friendly competition that is taking place in the background. Attendees are given three coins that are to be used to vote for their favorite sweet and savory options, and the establishment that racks up the most votes takes home the Audience Choice Award. For the Judges’ Choice Award, the restaurants had to impress actor Ty Burrell (Phil Dunphy to fans of “Modern Family”), his wife Holly (who’s also a great cook), RadioWest host Doug Fabrizio and food writer Vanessa Chang.
With such a wide variety of talent on display tonight—such as Top Chef contestant Katie Weinner with SLC Pop—both the audience and the judges had a difficult job to decide which restaurant made the best showing. The competition veterans at R&R Barbecue took home the Audience Choice Award for their Chicken Fried Brisket, maintaining the winning streak that they’ve enjoyed in previous Savory Salt Lake events. The R&R boys know how to make their signature barbecue into high end finger food, and the fact that it tasted amazing didn’t hurt their chances. The Judges’ Choice Award went to Eva, whose Beef Meatballs with Rioja Sauce were succulently prepared and served with a slice of buttered Country Bread to sop up all of that lovely marinade. In the sweet category, a dark horse called Desire Desserts took both prizes with their S’more Dreaming Brownie, a rich, fudgy delight topped with toasted marshmallow crème.
While I think that tonight’s award winners were justly delivered, I tend to save my three coins for those places that serve up creations that smack me in the mouth with something I’ve never experienced before. For example, I had made it a priority to visit Salt Bistro’s table ever since I read that they would be serving a Savory Crème Brulee. I wasn’t exactly sure what to expect as they ran a blowtorch over a foil ramekin that contained a mixture that looked a lot like the dish’s sugary counterpart—but then came the Braised Beef Shoulder and Red Wine Mushrooms. The meat and mushrooms were hot, but the goat cheese mixture—which was still covered with a crispy layer of torched sugar—was surprisingly cool, ensuring that each bite had a panoply of texture, temperature and flavor. I don’t throw the word luxurious around lightly, but I can’t think of another word that properly describes my experience with this dish, which is why it got my first coin. I was close to giving Provisions my second coin based solely on their dish’s description. They were offering up Whipped Foie Gras wrapped in Smoked Ham and placed atop a Johnny Cake. The kicker was the Pop Rocks that were sprinkled across the top—how could a dish dare feature foie gras and Pop Rocks on the same plate? Well, the folks at Provisions dared, and by damn, it was something else. The foie gras and smoked ham flavors caressed every last taste bud, and then the Pop Rocks showed up. The sparks of sweetness swimming around in all of that lovely smoked flavor were perfect reminders that food can be just as fun as it is delicious. While I also enjoyed Desire’s S’more Dreaming Brownie, it was Les Madeleines that got my third and final coin. Chef Romina Rasmussen had prepared a wonderful ode to chocolate with her Vairhona Chocolate Sable Bretons, a dessert that she explained was a type of chocolate shortbread. It was topped with Vairhona Manjari Cremeux—which was just as velvety and decadent as it sounds—along with a cherry that tied the multiple storylines of chocolate up nicely.
It’s difficult to think of any event that manages to encapsulate Salt Lake’s ever-expanding culinary landscape in the way that Savory Salt Lake does. It never ceases to amaze me that we have such talented chefs working to bring us food that isn’t afraid to make us weak in the knees, and I’m already looking forward to next year.
Photos: