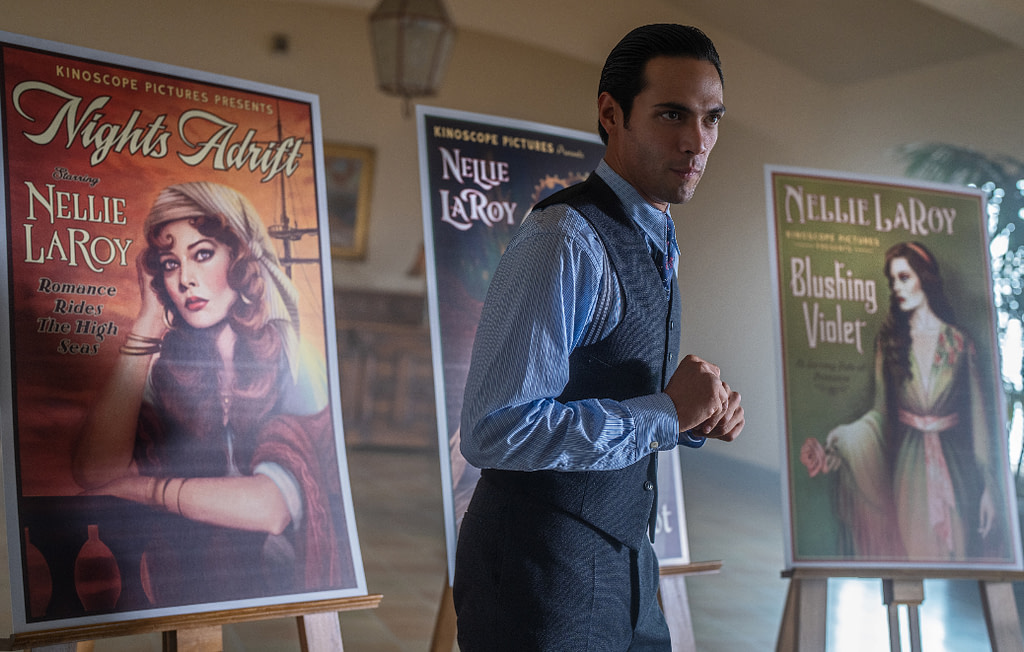 The wunderkind filmmaker behind La La Land, Damien Chazelle, has returned to the glitz and glamor of Tinseltown with his ambitious new period piece, Babylon. While it may not feature charming dance numbers with Emma Stone, it does offer arguably the most up close and personal shot of an elephant’s anus in action that you’re likely to ever see in a mainstream movie—so, really, it’s apples and oranges.

Babylon is a sprawling chronicle of Hollywood during the 1920s following the rise and fall of a group of characters during the last days of the silent film era and the rise of the talkie. Manny Torres (Diego Calva, Narcos: Mexico) is a humble immigrant from Mexico working a variety of menial jobs, and yearning for his big break that will get him on a film set. When Manny finds himself working a wild party thrown by A-list movie star Jack Conrad (Brad Pitt), the dashing, young errand boy meets aspiring starlet Nellie LaRoy (Margot Robbie),  and is instantly smitten.

The fate of these two little people in a big town full of big dreams is destined to be intertwined as Manny becomes a mover and shaker and Nellie a bonafide “It Girl.” Meanwhile, Jack finds himself struggling to keep on top as movies suddenly become almost as much about how one sounds delivering a line as how good they look striking a pose. Further, Sidney Palmer (Jovan Adepo, When They See Us), a highly talented jazz trumpet player, finds that as tough as this town is for everyone else, it comes with a wider list of challenges to overcome when you’re Black.

This all sounds promising enough as long it’s over three hours, alternates between rapid-fire, quick-cut edits and unbearably long sequences of nothing and features a foam cannon shaped like a penis. The cannon is just one of the many wacky and horrifying things you’ll have seared into your scarred psyche forever by any one of the 20 or 30 insanely graphic, cocaine-fueled orgy sequences as Chazelle sets out to make The Wolf of Wall Street look like Lyle, Lyle, Crocodile by comparison. The director has described Babylon as “a love letter to the movies and a hate letter to Hollywood,” though a more apropos description might be a love letter to big budgets and a hate letter to audiences.

While Babylon has some hilarious moments and visual marvels scattered throughout its mammoth runtime, Chazelle never lets up on bombarding audiences with every possible excess and the films it becomes an arduous ordeal to watch. Chazelle’s love/hate dynamic is so omnipresent that his characters are swallowed by it whole. The only one of them that we’re left with any affinity for by the end of it all is Sidney, and for the life of me, I can’t remember what happens to him. Therein lies the biggest problem: What little point that Babylon has to make—and it’s very little—is drowned out by the cacophonous din of debauchery, gross-out gags, violence and bewildering interludes of screwball zaniness.

The cast is great, however, and Robbie sizzles in a sexy, goofy, energetic tour de force, at least until the character wears out her welcome a third of the way through the picture. Pitt is given some truly terrific moments, and Calva has the charisma of a young Antonio Banderas. In addition to the performances, the production values are top notch, with beautiful cinematography and lively music. I dare say that if you were to cut an hour off of Babylon, it would only be 40 minutes too long and the mix of strengths and weaknesses might be just barely enough to make it worth watching once.

Chazelle is gifted filmmaker, and It’s difficult to overstate what a true debacle he’s made here. The mere invocation of the title Babylon will become a synonym for hubris and failure on the level of Heaven’s Gate, 1941, One From The Heart or any number of infamous, cinematic stinkers. Give yourself the gift that keeps on giving this Christmas and stay home this weekend. –Patrick Gibbs