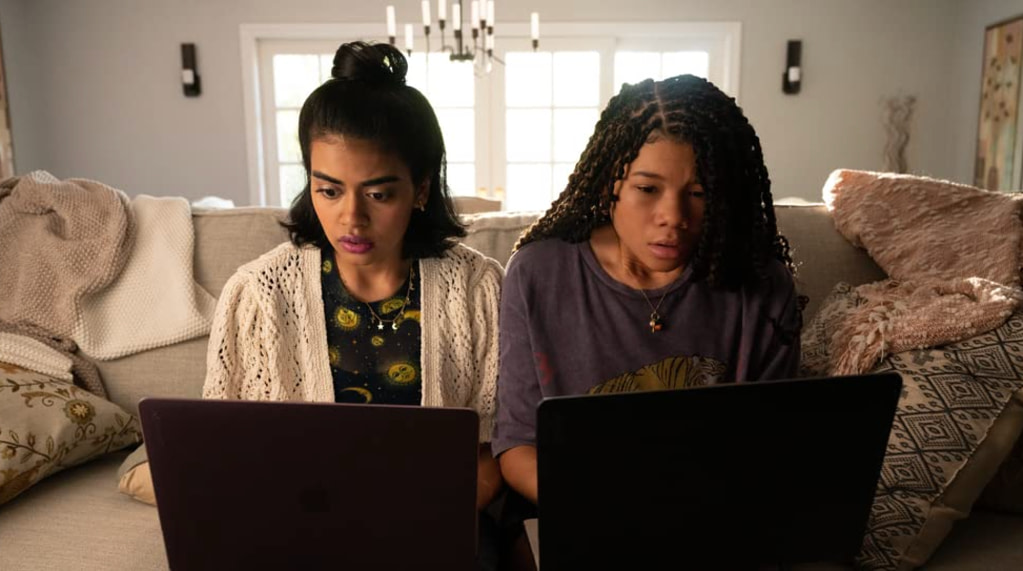 Missing is the newest installment in both the Searching (2018) franchise and the ever-evolving genre of “screenlife,” a term filmmaker Timur Bekmambetov coined after pioneering the genre with his hit horror movie Unfriended (2015). The genre embraces screens as a storytelling device, moving entirely through MacBook screens, iPhone screens, PC laptop screens, smart watch screens and more.

Though we probably already look at enough screens day to day, Missing is surprisingly fresh and familiar enough to capture your attention and maybe even your heart. Aneesh Chaganty, writer and director on Searching, passes the directing torch to Nick Johnson and Will Merrick, the editors on Searching. Missing expands Searching’s cinematic world, and while the standalone sequel is an improvement, it is only a small jump from the original.

Missing begins much like Searching. Again we are met with a similar father, mother and daughter trio. We open in 2008 with a tender moment between father and daughter. Young June (Ava Lee) candidly records her father, James (Tim Griffin) on a camcorder that was presumed to be defunct, when suddenly Grace (Nia Long) confiscates the camera. Dad, doing what dads do, runs to the defense of June, and Grace stands her ground, but just before tensions rise, his nose starts to bleed. He reassures her that “it’s just the altitude.”

After a somber montage of google searches for “meningioma” and emails about cancer, we tragically conclude that it wasn’t “just the altitude,” effectively invoking the anxiety we feel about our parents and their well-being. All that is left of James is a folder of memories labeled “for June.” Hoping to move on from the grief and start anew, Grace moves baby June from San Antonio to Los Angeles. A clever little time jump of 12 years brings us to the present, when an older June (Storm Reid) and Grace have seemingly grown apart. A series of subtle, passive-aggressive gestures during a FaceTime call signals their rocky relationship as Grace tries to explain that she’s going away for the weekend with her enigmatic boyfriend, Kevin (Ken Leung), who might be the one responsible for the growing rift in their relationship.

Long and Reid complete each other perfectly as the overly protective mother and dissatisfied teen, a relationship dynamic that evolves throughout the movie. While Grace and Kevin are away in Columbia, June, doing what teens do, throws a massive rager, gets too drunk and then vomits herself into embarrassment, which we witness through a series of Instagram stories, TikToks and Snapchats; a harsh reminder that at any moment we could be the butt of someone’s social media post. The following day, June suffers a terrible hangover made worse by the realization that it’s Father’s Day. Scrolling through social media posts dedicated to dads, she is overcome by emotion, causing her to reflect on her dad and his death. However, we only have a moment to grieve with her as reality sets in. Monday morning quickly arrives, and June is abruptly reminded of her one big responsibility: picking her mom and Kevin up from the airport. She frantically hires a Taskrabbit tasker to take care of the mess at the house and then speeds off to the airport, only to discover that her mother and Kevin never arrived.

As the mystery unravels, the writing and editing in Missing shine, in spite of the recycling of certain elements from the first film. Using all of the technology that you and I have at our fingertips, June sleuths her way into Kevin’s accounts and is sent down a rabbit hole into Kevin’s questionable past, unearthing secrets that should have never have come to the light. The editing is fascinating, at one point emulating the famous “dolly zoom” found in other classic films like Raging Bull (1980) and Vertigo (1958), but this time it’s done through a MacBook screen and its open windows, a cinematic first. June utilizes every technological resource possible, attempting to discover details about her mother and her boyfriend with only a few clicks. I couldn’t help but to be shocked by my own internet vulnerability. However, how one interprets that information makes the difference. The hidden details that June finds were supposed to help her find her mom, but they only push her down yet another dark hole as she learns that her mom may not be the person who she seems to be.

While Missing is certainly building off the foundation that Searching laid, Missing still feels a bit too familiar. The pacing is satisfactory and allows the audience to breathe more than its predecessor, and the new characters are fun, but ultimately the recycled plot beats detract from the whole. It would have been nice to see more evolution. (Maybe visit another state at least?) As a standalone sequel, Missing rewards having seen its predecessor and is well worth your time, a thrill to untangle and maybe even a bit informative. Let’s just hope you will never find yourself in the same position as June. –P.J.