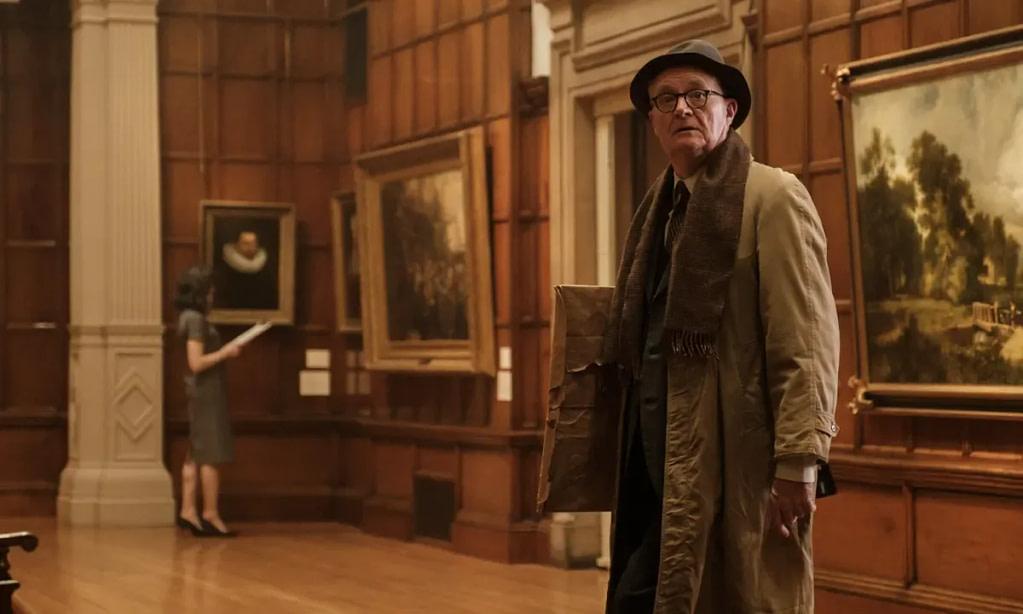 The Duke is the kind of film that gives feel-good movies a good name, and it’s proof that even if crime doesn’t pay, it can be incredibly entertaining. Photo Courtesy of Ingenious Media.

Pathé and Ingenious Media
In Theaters 05.06

A good heist movie is always something that can pique my interest, and it’s been a while since we had one that was truly interesting. The Duke is definitely outside the norm for the genre in all the right ways.

The Duke is based on the true story of Kempton Bunton (Oscar winner Jim Broadbent), a 60-year-old taxi driver, who stole Goya’s portrait of the Duke of Wellington from the National Gallery in London in 1961. Bunton is an amateur playwright and activist who has an obsession with the notion that older people and pensioners should not be required to pay Britain’s television tax. That obsession serves as a distraction from a deeper pain, one that his wife, Lily’s (Oscar winner Helen Mirren) doesn’t want to face. Bunton’s bizarre, Robin Hood-like motives for the theft, as well as his colorful personality, make him both an embarrassment for the establishment and an instant celebrity for the masses. There’s one big question at the heart of it all: is he telling the whole truth?

The Duke, the last film for the late director Roger Michell (Changing Lanes, Hyde Park on Hudson), is an utterly delightful and spirited character-based comedy that brilliantly deals with serious issues such as grief, marital problems and social injustice without ever losing its light and inviting tone. The screenplay by Richard Bean and Clive Coleman is witty, whimsical and brimming over with a uniquely British charm. Michell, who had a gift for slow-building stories, guides with a deft and confident hand. It’s a perfect film entry in a solid filmography, though it certainly left me wanting to see more.

The Duke’s cast is a big selling point, with both Broadbent and Mirren giving pitch-perfect performances, Fionn Whitehead (Dunkirk, The Children’s Act) shining brightly as their sun, and Jackie, his chemistry with Broadbent absolutely divine. The most surprisingly sublime performance, however, comes from Matthew Goode (Leap Year, Belle) as Bunton’s barrister, Jeremy Hutchinson. I really didn’t care for Goode’s performance as Ozymandias in Zack Snyder’s Watchmen, but he’s really been winning me over in smaller films. Still, the film belongs to Broadbent, and he should be considered a dark horse Best Actor contender for his hilarious and touching portrayal of this fascinating figure.  As if all of this wasn’t enough, the music is by the great George Fenton, whose classic scores are  as varied as Gandhi, Groundhog Day, Cry Freedom and Ever After: A Cinderella Story. Fenton is a personal favorite, and he adds so much fun, personality and bouncy energy here.

The Duke is a wonderful little film and one of my favorites of 2022 so far, and if you’re looking for an alternative to the effects-driven chaos of Doctor Strange and the Multiverse of Madness this weekend, I couldn’t possibly think of a better choice. The Duke is the kind of film that gives feel-good movies a good name, and it’s proof that even if crime doesn’t pay, it can be incredibly entertaining. –Patrick Gibbs