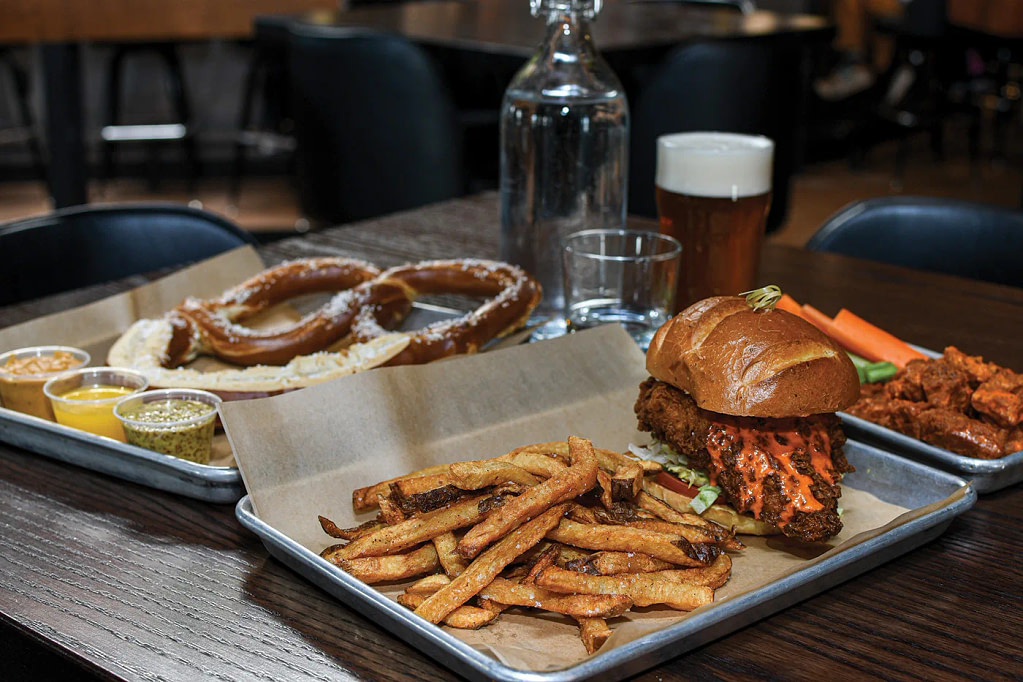 Grid City Beer Works (GBCW) sits east of Best Buy, south of Home Depot, west of Highway 15 and a five-minute jaunt from the Trax line. There are dozens of high- and low-tops for guests to sit at and convenient bar seating with a front-row view of the stainless steel brewing tanks. On a Friday evening, there was little room to spare as people packed themselves into the dining area. This time of year, the outdoor patio and rooftop deck were closed, but from pictures online it looks like the view cannot be beat when dining or drinking up top.

Upon being seated, I ordered a glass of the Extra Brown Ale, 6.6% ABV ($7), which was dark in color and rich in flavor with a luxuriously creamy mouthfeel. Our server, Steven Morrisson, shared with us that the two most popular appetizers were the Bavarian Pretzel ($12) and the Edamame H

ummus ($8). While the hummus (edamame-horseradish hummus topped with chickpeas, green onions and sunflower seeds and served with crudité or bread) sounded amazing, the pretzel was calling my name. It came on a stainless tray, which seemed the only proper transport for such a massive knot of bread, and its three dipping sauces. The 10” brown pretzel was hot and speckled with coarse ground salt. The sauces included GBCW’s own Brown Ale Whole Grain Mustard, melted Vegan Garlic Butter and a Vegan Cheese sauce. Without knowing it, it would be hard to guess that the sauces weren’t the “real” thing, but vegan substitutes.

“Our server, Steven Morrisson, shared with us that the two most popular appetizers were the Bavarian Pretzel ($12) and the Edamame Hummus ($8).”

Another round brought to us was a pint of Double Dark Chocolate/Cherry Truffle Nitro Brown Ale, 5.0% ABV (12 ounces only, $9), and a pint of their Cream Ale, 5% ABV (16 ounces, $5 or 20 ounces, $6). The Brown Ale tasted like a blend of hot chocolate and cherry syrup and was served with a heart-shaped, vegan dark chocolate and cherry truffle from local chocolatier Anne Reist’s The Chocolate Palette. The Cream Ale was a dramatic contrast to the intense flavor of the Nitro Brown Ale, but it was refreshing in its own way. The golden-colored beverage smelled of citrus blossoms and tasted light, malty and pleasantly floral.

“The sauces included GBCW’s own Brown Ale Whole Grain Mustard, melted Vegan Garlic Butter and a Vegan Cheese sauce. Without knowing it, it would be hard to guess that the sauces weren’t the “real” thing, but vegan substitutes.”

The Daily Bugle ($16), a cheeseburger– Philly cheese steak hybrid, came as Angus ground beef with chopped onions, peppers and melted American cheese on a seeded Hoagie roll with skin-on, thick-cut French fries. Seeing that they had a number of vegan items on their menu, I ordered My Lil Biscuit ($16), which came as a bowl with a vegan cheddar biscuit, vegan sausage with rosemary gravy and crispy tempeh bacon topped with a splash of hot sauce and a handful of chopped scallions. Adding vegan options to a menu is easy, but creating a vegan dish that is flavorful, filling and full of varying, complementary textures is as difficult as it gets. After trying this, I now want to try every vegan dish this talented kitchen can produce. In addition to these specials that are no longer available, there is still plenty to choose from, such as the cornmeal dredged Fried Green Tomatoes ($12) covered with vegan pimento cheese sauce and topped with paprika and green onions. Another regular item is their Wings ($14), which can be either seitan (vegan) or smoked chicken. Either option comes with crudité and your choice of sauce (SLC Hot, Buffalo, Nam Chim Kai or Naked Cajun).

Three core beliefs—taste, balance and finish sit at the heart of Grid City’s devoted work. GCBW does not shy away from a challenge or from pushing the known limits of brewing. From their website to their social media accounts to their on-site staff, the passion is tangible and forges dedicated fans of their creative products from that very first sip or bite. Find Grid City Beer Works on Yelp and Untappd, follow them on Facebook @GridCityBeerWorks and on Instagram and Twitter @gridcitybeer for updates, events and more.