Kicking off American Craft Beer Week on Monday, May 11, Red Rock held a tasting event featuring four vintages of their Rêve, a soured Belgian tripel–style ale. Red Rock first released the much coveted Rêve in November of 2007, and it continually sells out within a matter of days. The gastropub hosted the dinner in their sectioned-off private dining room at their Fashion Place location at 6227 S. State St. 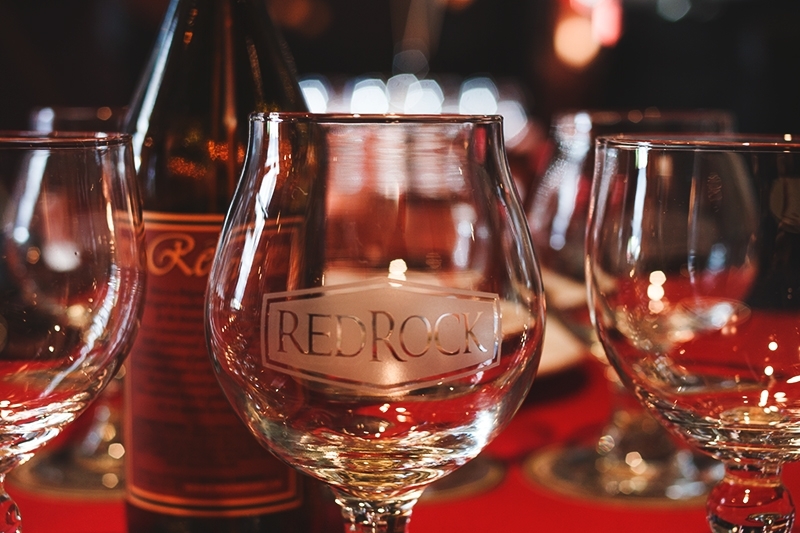 Red Rock demonstrated the diverse tastes of its Rêve ale, which is crafted in the Belgian tripel style. Photo: Talyn Sherer
Kicking off American Craft Beer Week on Monday, May 11, Red Rock held a tasting event featuring four vintages of their Rêve, a soured Belgian tripel–style ale. Red Rock first released the much coveted Rêve in November of 2007, and it continually sells out within a matter of days. The gastropub hosted the dinner in their sectioned-off private dining room at their Fashion Place location at 6227 S. State St. The décor reflected the significance of uncorking the 2009, 2011, 2013 and 2015 vintages, as the long tables flaunted regal red tablecloths. Two tulip stem glasses plus two chalices awaited guests at each seat.
Red Rock Brewmaster Kevin Templin introduced each Rêve vintage as servers poured them. Templin evidenced his continued passion for sour beers as he explained the process of brewing the Rêve and the characteristics that arise from each over the course of their respective aging periods. “I think beers really age gracefully,” he said with regard to high-caliber beer in comparison to the way in which wine ages.
Red Rock ages the Rêve in chardonnay barrels for about a year, which adds tartness. Brettanomyces sours the beer, and Red Rock uses champagne yeast to shape the carbonation. We started with the 2015 vintage and worked back in time. I was fortunate enough to sit near SLUG Beer Reviewer Mike Riedel, who was kind enough to expound on Templin’s introductions to each bottle. Servers poured Rêve 2015 into a chalice, and Templin outlined its aroma as woody but fresh with banana and peppery notes. Riedel and SLUG photographer Talyn Sherer detected peach in its smell, and Utah Brewers Guild President Phil Handke pointed out its unripe-fruit character. As it warmed, I tasted pineapple notes.
Red Rock Fashion Place chefs Victor Durant and Randy Morin also fed attendees Beer-Braised Short Ribs, Orzo Vegetable Medley, Roasted Rosemary Spring Potatoes and Strawberry Kale Walnut Salad. Personally, I think that the ribs were the culinary highlight, as they were tender and rich on account of the gravy. The salad was a refreshing counter-balance, whose strawberries tasted fresh, and the Orzo Vegetable Medley’s rice and potatoes filled in the rest nicely. Clearly, after 21 years in the business and counting, Red Rock know what they’re doing.
The focus, though, was the Rêve, and we continued through this time-traveling journey with the 2013 vintage. Dustier and more opaque than the 2015, we detected pear and honey bitterness with the 2013, which a tulip stem glass cradled. The 2013 and ’15 are more vinous and sour, while the 2011 and 2009 are  more true to to the Belgian tripel style. In a chalice, the 2011 exhibited a leathery barnhouse taste in contrast to the other three and was my favorite. It and the 2009 are more “round” (versus the sharp tartness of the 2013 and ’15), as Riedel put it, in that they are sweeter than the their younger counterparts. The 2009 vintage (in a tulip stem glass) emitted a grape-like aroma for me. It has quite a thin mouthfeel and finished delightfully bitter. Its effervescence would have tricked me into thinking it was closer in age to the 2015 had I not known—it was highly carbonated and the most like champagne.
Overall, it was amazing to taste how these beers age. We were lucky to share these Rêve vintages—Red Rock is out of purchasable bottles until next year. Even so, march forth in the name of American Craft Beer Week, and support local breweries like Red Rock! Watch out for Red Rock’s annual Paardebloem sour beer that comes out this Friday, May 15.
Photos: