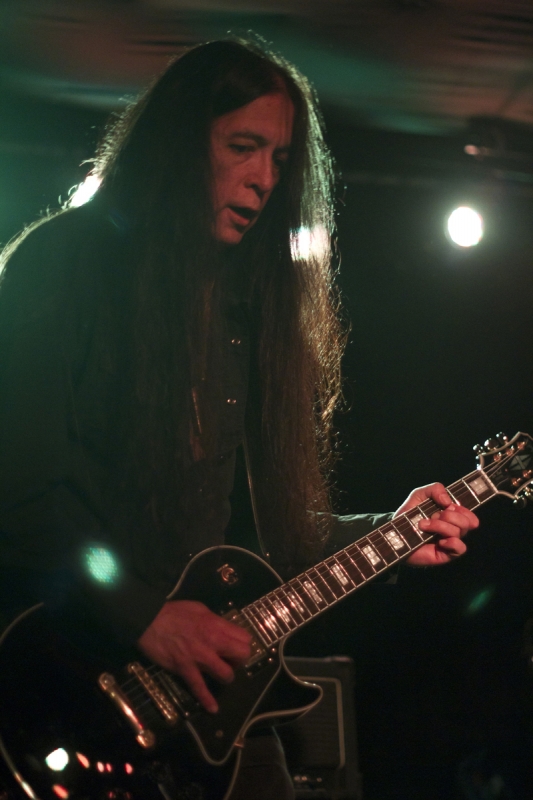 Hordes of human scum gathered at the landing site of the Gwar cover band Scumdogs’ space ship, also known as Bar Deluxe. A day celebrating love and consumerism was tainted with fake blood and green semen and shall henceforth be known as the Valentine’s Day Massacre. The spectacle of vile monsters sacrificing human slaves and radiating a hatred for humanity was too great to flee and those who remained enjoyed a really, really excellent show.

Thunderfist and Black Sabbath cover band Irony Man were the other two local bands playing this show, aiding in luring friends and fans to the venue for a night of debauchery and fun on Saturday, Feb. 14.

Irony Man was far beyond a simple cover band. Guitarist Russ Millham perfectly recreated Tony Iommi’s guitar tone from the first few Black Sabbath studio albums and played songs such as “Fairies Wear Boots,” “War Pigs” and of course “Iron Man” with precision and ease. Millham created his own solos that sounded at home sandwiched between Iommi’s iconic riffs. Vocalist Jeremy Sundeaus performed as a convincing Ozzy Osbourne imposter, from the closeness of his voice to his discombobulated mannerisms. He scooted about the stage clapping with a bewildered expression, much like Ozzy himself, and spoke with a British accent between songs. Andy Upchurch on bass sported light blue denim bell-bottoms and a bass tone that would make Geezer Butler proud. The mix of drums, vocals and guitars was perfectly balanced and drummer Bob Sutton’s fills were consistently well executed.

The audience was instantly sucked in by Black Sabbath classics and, although the venue was half full, the massive amounts of enthusiasm and energy were spreading like a disease. Crowd members were headbanging and singing along as a secondary choir throughout the venue. A tuning issue arose at the beginning of a song but the hiccup was quickly fixed and the fans seemed unaffected.

Thunderfist was the next of the local bands playing the show, continuing the intoxicating energy wave Irony Man set in motion. The stage was packed with the six-piece band: three guitarists, Mike Mayo on bass and vocals, Erik Stevens on drums and vocalist Jeremy Cardenas. Space was very limited on the stage but that didn’t stop the band from moving around. Cardenas spent little time onstage and instead jumped around in the middle of the crowd. His excited performance was contagious and the audience surrounding him was dancing, jumping, singing along and going all out nuts! The energy lulled slightly in the middle of the set but amplified with Thunderfist’s final song and a crowd favorite, “Money, Bitches, Cocaine.”

The sound during Thunderfist’s set was as optimized for the loud rock and roll band as it was for Irony Man. The amps were lively but the enormity of having three guitars was lost. However, the bitchin’ rock and roll rhythms were enthralling and the guitar solos rocked the venue along with the people in it. Thunderfist had a minor setback in the beginning with Mayo’s bass head not working correctly but Cardenas spent the time conversing with the crowd and, before you knew it, the issue was resolved. The dual vocalists were powerhouses! Their voices meshed well and the trade offs between the two were fluid and unique.

Once Thunderfist and their gear parted the stage, the red velvet curtain dropped and ghastly shadows were cast upon it. It was evident the demise of humanity was at hand. Scumdogs had risen from the grimy depths of Salt Lake City to pay homage to their Gwar overlords and slaughter a few human slaves in the process. The band’s stage show was nothing short of a fantastically horrendous display of do-it-yourself effects. Skunkerus Urungus wasted no time dousing the crowd in green semen from a squirt gun penis and a masked human slave quickly covered everyone in the pit with fake blood. In honor of Valentine’s Day, Cupid found his way on stage. Disgusted, Urungus posed the question; “Do I let it live?” to which the crowd unanimously responded, “No!” In defiance of Valentine’s Day, Urungus ripped Cupid’s heart out, assisted by guitarist Holgius Maximus.

Scumdogs slayed classic Gwar songs such as “Ham on the Bone,” “Tormentor,” and “Gor-Gor” with a tiny dinosaur perched atop a table between Urungus and guitarist Smellsac the Jaws of Death. The slaughter continued with Urungus ripping human slave Chris Drelinger’s chest off his body producing two streams of blood raining over the audience. Scumdogs’ manager Sleazy P Maxtini appeared on-stage with his pompadour and giant gold dollar sign hanging around his neck and performed “Slaughterama.” Paulcake the Mighty played bass and took part in a ceaseless crusade of harassing the human scum and Jizzmac Dan Gusha destroyed the drums. Mosh pits broke out but didn’t last long due to the puddles of bodily fluids in front of the stage, but that never dampened the fun. The audience was fired up and filthy and the blasts of drunken energy continued past last call.

The destruction in the wake of Scumdogs’ earthly visit was immeasurable, though not a complete genocide. I can’t shake this terrible feeling that the band will return to ensure a thorough decimation of the human race in the near future. Let’s hope the other local bands playing the show can escape their destructive wake.