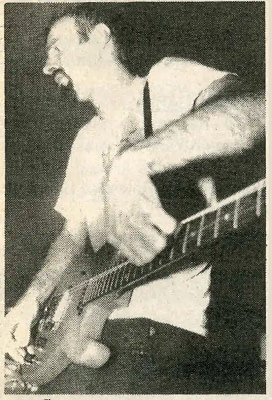 With as much talk that preceded the show, I knew I was in for a treat. I was told tales of fire, tribal dances, body paints and people taking their clothing off. Needless to say, I was excited.

I actually thought Skozey Fetisch did quite poorly. Period. Crash Worship is about the closest thing you can see that reminds you of Hell. They entered the building with several beasts of burden, pounding a very heavy beat that didn’t end the entire night. Water seemed to be the centerpiece around which the group organized their sound. I don’t think any one person left without the feeling that their primitive occult instincts had not been sickened into a deep dark grave. I’d also like to thank the fire blower! Good show! 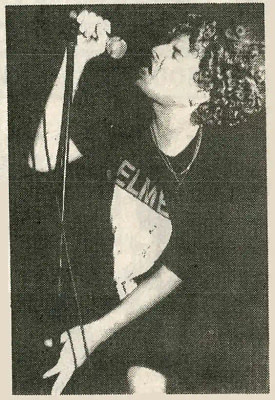 Shame on you Salt Lake! For years many of us have asked Utahan’s (and Salt Lakers?) to support their scene, and to be fair, many have. But, now the trend seems to be supporting your scene and ignoring worthy others.

New York’s Letch Patrol, probably the best unsigned hardcore band Salt Lake has seen since Malignous Youth, was the latest to get the non-royal treatment. Added on to a 3-way local bill, Letch Patrol played for just about a dozen patrons who were smart enough to linger after Salt Lake’s 3-piece Iceburn.

Sorry, you little shits, but you missed out. Letch Patrol’s  all-too-brief and all-too-unattended set featured ragin’, galloping hardcore done in the NYC hardcore style; fast, furious, and funny.The mean-spirited (but well intended) “Louise” typified Letch Patrol’s attributes—Chicken’s bright guitar shards, Harris Pankin’s brilliant vocals and the tightest rhythm section this side of Helmet. “I Am The King” (dedicated to the L.A. riots)showed off a burgeoning politically conceived dide, while a colored cover of Priest‘s “Breakin’ The Law” showed they’re not getting too serious.

To be fair to Iceburn, they are talented. But, their spoiled-shit fans ruined a perfect evening. Besides, though Gentry‘s vocals showed considerable improvement, Iceburn’s longer, experimental side leaves me hangin’ for their uptempo punk days. Is it a crime to be a punk band these days?

As for openers Skozey Fetisch and Anger Overload, unfortunately I missed both due to scheduling. I look forward to seeing Brad Barker’s newest musical venture soon though. 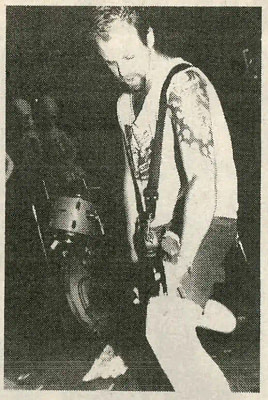 It has been a long time since a band has just knocked me on my ass. In fact, it would have to have been October of ‘88 when I saw The Fluid play at The Word. ZIPGUN did just that. Another one of Empty Record’s fine bands. The only thing I can compare them to is The Fluid played at 45, just as powerful and almost as loud.

The night was a great line-up with Gnome up next. Except, to be honest, Gnome should have played first. They are a killer band that sort of reminds me of early Soul Asylum, but they didn’t have quite the kick that ZIPGUN had, so their hard melodic set of great songs came off very anticlimactic. They played herein before with Neurosis and they will probably be back, and you ought to check them out.

These wacky cats get me off; the second time around for ex-ingredients of Camper Van Beethoven—Monks of Doom. This crew is definitely worth seeing a time or two (weekly). 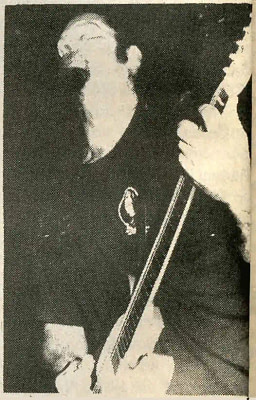 Friday night, the 16th, Monks loaded a couple of hours at Spanky’s Cinema Bar with coppery rockadelic rhythms and rough textured tunes. And what better time to see these guys than October; the month of spiders, bats and skeletons? What’s the connection? I don’t know, but there is one.

I’m impressed by the way David lmmergluck and Greg Lisher harvest unpredictable harmonies and twisting changes out of their strings—producing dense auditory pleasure. I think these crazy cards are underrated. Although like them, it is, however, still weird for me to get used to Victor Krummenacher‘s vocals. These farmers plow through medleys of spacey sounds, plant a little percussion, and reap hauntingly mossy melodies. I think that they write songs and then play them backwards (just kidding).

Monks’ tunes create a spectrum of moods and sensations. Full flavored fun! It’s great to watch drummer Chris Pedersen disentangle himself from one of the more rolling ditties, too.

While walking home from Spanky’s ,I discovered that after experiencing Monks, I was drenched in the Halloween spirit and bought some penny candy. Another great journey of sound to dose of brain fertilizer.

Ed. Note: Those who caught Commonplace’s set-up-quick-and-get-off-the-stage-fast set said Commonplace played one of the best sets to date. Commonplace is a band that plays very rarely and seeing them play in a club to a small crowd was unique. This is a local band that should be checked out by everyone. 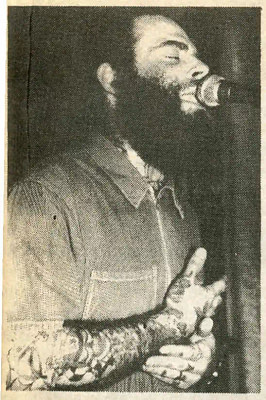 Salt Lake definitely has its own sound, especially in the hardcore genre. Ratchet is a very good example. They are similar to Iceburn in a lot of ways, and just as killer.

Lungfish made a return visit to our pretentious city. If you haven’t heard them, they are the kind of great rock-n-roll Dischord has been dishing out lately. They have the appearance of deep sea fishermen—I guess you’d call them longshoremen. If you missed them this time, you’d better pray to Mecca that they come back. They put on a totally killer show.

Coming all the way from Portland, Oregon, Crackerbash heated up the evening with fast, furious punk rock. I don’t know if they had any ulterior motives by starting so late, but everyone was pretty beered up for a really good time. They have a record out on Empty Records that I strongly suggest buying. I put it right up there with Johnny Horton and Zipgun.

Coke addicts and truckers unite, you have finally found your niche in the universe. Supersuckers gets me hotter than my grandma’s poodle. There is nothing pretty about this band, even Satan doesn’t wield a more powerful pitchfork. Speedy guitars and enough razzamanazz to get your head banging. My favorites of the evening were “Saddle Tramp,” and of course the Madonna cover, “Burning Up.” I just didn’t get enough. 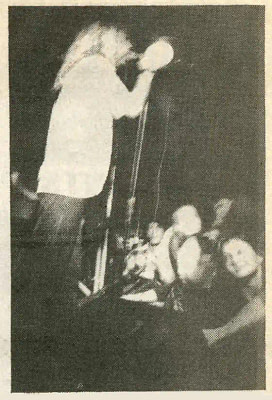 Every time I see Ratchet I like them more and more. Julie has a great voice and she is backed by a great band. If you haven’t checked them out because of their supposed “straight edge” aspect, fuck a dead cat or something, because you really are missing out on something great. Yes, they do have a prominent Iceburn type of a style, but I like them even better. The vocal style is astounding and can even sound playful. Near the end of their set, Julie sang, alone, no band, just improvising. She made up some of the greatest stuff as she went along. Two thumbs up.

Bad Yodelers came across as the local superstars … and why not. They rock hard. Terrance‘s harmonic vocals and stage presence are incredible. The crowd got moving quick. With the no stage diving law in effect, kids found other ways to catch air. They had a lot of equipment problems, but it was still fun.