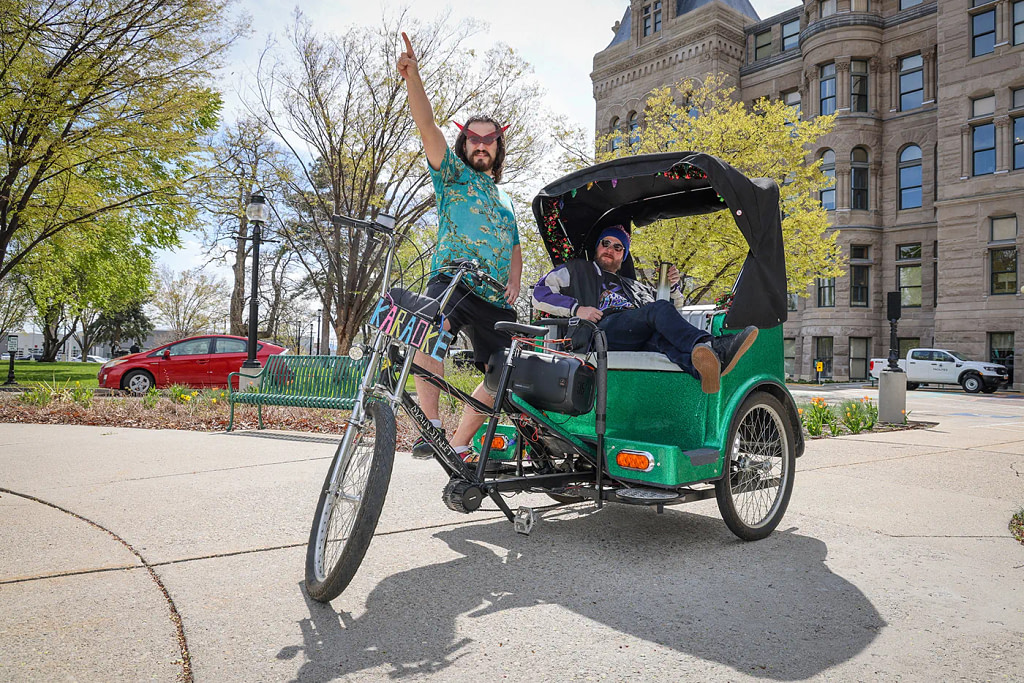 For this year’s Annual Bike Issue, I wanted to get the lowdown on the pedicabs of SLC. You know—those rickshaw-looking, three-wheeled carousels of fun you’ve seen while stumbling out of your favorite downtown bar? Or, perhaps you were too drunk to remember. Unlike a taxi or an Uber, I’ve never seen a sad drunk girl in the back of one of those things, so they must be doing transportation right.

I interviewed local pedicab peddler Patrick Hoerner to get the lowdown and some more info. Pat has been distributing drunks, Jazz fans and convention-goers alike to and fro downtown via his awesome cab for about nine years. When he started pushing pedis, he was riding his bike to and from work and worked at Jimmy John’s all at the same time, so there’s no need to question his dedication to cycling.

There are a couple of pedicab companies in Salt Lake, but recently Pat forked over some cash for his own chariot and has gone independent. Starting his own, one-man wrecking crew of a company called—you guessed it—Pat’s Pedicab.

His cab is green and aptly named Mary Jane. She can comfortably sit three or four people and is part electric so that Pat can haul ass.  Equipped with bluetooth speakers so you can impress your friends with your shitty music—Pat won’t mind. Overall, she’s a beaut.

“Unlike a taxi or an Uber, I’ve never seen a sad drunk girl in the back of [a pedicab], so they must be doing transportation right.”

Pat told me that for the most part, the pedicabs creep out at night on the weekends, usually hovering around Main Street and 300 South, the hub of Salt Lake’s unofficial bar district, and there’s usually about 20 of them a night. There’s usually no shortage if you and your buddies need a ride.

You also see them hovering outside of Jazz games, and of course they do downtown conventions, too (If they ever come back from COVID). Pat informed me on some other cool events they do that I didn’t know about, like Utes football games, and Pat’s been lucky enough to cab for vroom-vroom bikers up in Sturges and the Kentucky Derby.

The other thing I didn’t know is that Pat will give personalized downtown tours, taking tourists sightseeing around the beautiful Temple Square mud pit going on right now and some other secret spots perfect for getting Instagram likes and unique views of our special little city.

Although the average distance for a ride is a handful of Salt Lake Brigham-Blocks, I wanted to know about Pat’s personal longest ride—It was to the Exotic Kitty Strip Club on 33rd and State. He also had to jam into Sugarhouse one night from Downtown,. When he started, he unwisely agreed to pick someone up from Red Butte Gardens, which is basically all uphill from Downtown.

“If you are just zipping around Downtown, try a pedicab instead of a Lyft or Uber (I used to Uber drive, and trust me, it’s a shitty company).”

Keep in mind that while long distance rides sound fun, they will cost you.But if you are just zipping around Downtown, try a pedicab instead of a Lyft or Uber (I used to Uber drive, and trust me, it’s a shitty company). You’d basically be paying the same price, its way more fun and a pedicab is way easier to puke out of than an Uber.  But please don’t puke in a pedicab.

That being said, I asked Pat to clarify the price rates. For the most part, it’s up to whoever is peddling you. Most of the time, a bar-hopping excursion Downtown is around $10, but essentially its up to the driver. More people means more work for the drivers, and keep in mind that these guys are working their asses off (literally), so if you don’t tip them you are a complete dickhead.

As mentioned above, Pat will give you a 15-minute downtown tour for $25 or a grand tour for $100. The last time I took a pedicab aside from Pat’s, I was so drunk that I tipped the driver $200 instead of $20. I have no regrets about that mistake on my part.