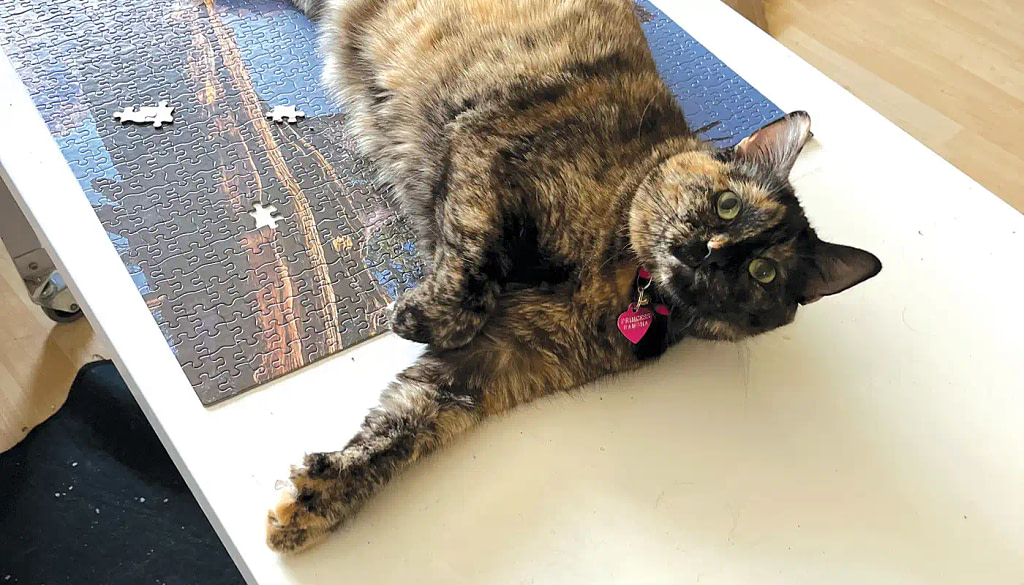 But I must confess—Princess Ramona will never be as cool as my last cat, Jet Pack. In fact, no cat will. When parents with more than one kid say they love each child equally, I know they are full of shit. I know this because I love Jet Pack more than any other animal ever. But this article isn’t about him (because he’s dead now, resting in a grave in front of my old house in Rose Park and the new owners have no idea).

“I do feel most cats should be allowed to roam the outside world; it’s in their nature.”

Aside from random mentions here and there, I last wrote about Princess Ramona four years ago when I got her and she was an itty bitty kitty. So, this is an update on her life and times.

The other night, I had a dream that Princess Ramona was pregnant. I remember being confused in the dream because I had my pussy’s pussy sewn shut years ago. Birth control is not only an important issue for humans, but also for animals. I asked the vet if there were IUDs for cats, because totally shutting down my cat’s uterus seemed a little extreme. But alas, that doesn’t exist. And, I have never met another cat that deserves to fuck her anyway.

Besides, she never goes outside. She has no concept of cars or weather. This is by design, and for a couple reasons. First reason is that she’s not the smartest kitty of the litter. Basically, Princess Ramona is dumb as shit.

I believe Princess Ramona’s lack of cognitive cat functions is due to the fact that she is possibly inbred. The main reason that I think her mom and dad are also her aunt and uncle is because she’s a polydactyl. If you don’t know what that means, I’ll explain it:  Sometimes cats are born like little mutants and have extra claws on their paws. It’s not super common, but it’s not totally rare either. Princess Ramona has thirteen front toes that make her paws look like little baseball mitts. It also makes her walk kind of clumsy—not nearly as nimble as a regular cat—and I have to trim the nails bi-weekly so her claws don’t hurt her paws. That’s another reason she can’t go outside—if she needed to climb a tree to avoid a stupid pitbull or something, she’d be fucked. But I gotta admit, the clumsiness is hella cute.

“Princess Ramona has also noticed that a hobby I share with 80 year old widows is jigsaw puzzles, and she loves nothing more than fucking up my unfinished puzzles.”

However, I do feel most cats should be allowed to roam the outside world; it’s in their nature. Princess Ramona has been able to transfer those outside urges into annoying the shit out of me in my apartment. She demands a lot of attention but will only cuddle on her own time, which is usually when I’m hungover and trying to take a nap.  Other than that, if I try to cuddle her, she’ll bite. She’s a biter.

Princess Ramona also excels at the spill game. A lot of cats like this game, and some cats are better than others. They hone their hunting instincts to knock over whatever is important to me, usually beverages of an alcoholic nature or food. She always tries to eat my food, especially my ice cream. She loves ice cream. Princess Ramona has also noticed that a hobby I share with 80 year old widows is jigsaw puzzles, and she loves nothing more than fucking up my unfinished puzzles.

Aside from all of this, Princess Ramona is a tremendous apartment cat and I love her very much.