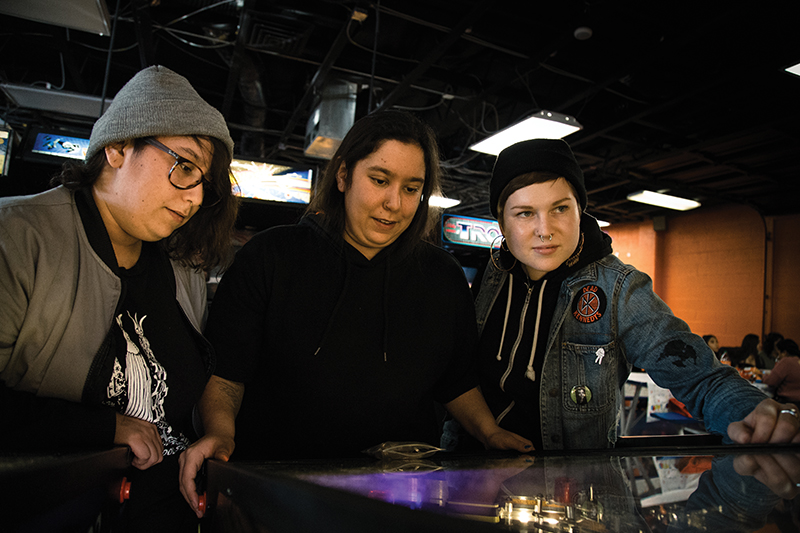 The March edition of SLUG’s Localized concert series will feature some of the city´s finest in brash and creative rock music. Performances by Savage Daughters, Sonnets and Portal to the Goddamn Blood Dimension will give the night an emotional, raucous temperament, so come to the $5 show on Monday, March 25 at 8 p.m. As always, SLUG Localized is sponsored by Uinta Brewing, High West Distillery, 90.9 KRCL FM and Spilt Ink SLC.

Savage Daughters are a group that define themselves by their unity. The group is a classic power trio with twins Alex Lopez on guitar and Tori (who goes by Tut) Lopez on bass, and Summer Sigritz on drums, with all three sharing vocal duties. The sound is certainly stripped-back, though Sigritz’s jazz-influenced drums and the full-bodied sound of the stringed instruments help give an oomph that the group’s style of rock deserves. Alex and Tut have the family tie, but their relationship with Sigritz goes all the way back to highschool. They’ve long admired each other’s music and art, but only in the last few years, now in their mid-20s, did they come together into their current lineup.

On the surface, Savage Daughters’ sound is fairly straightforward. The trio references storied genres like shoegaze, garage rock and dream pop as influences, and the sound of those styles is easily heard in the brittle guitar tones and straight-ahead rhythms of their tracks. The longer you listen, however, the weirder things get. There’s little, if any, conventional structure to these tracks, many of them full of winding changes and unexpected transitions. “We just want more of the emotion to be felt rather than ‘here’s this story,’ A-B-A-B with a bridge,” says Alex. Sigritz adds that, on top of this concern of representation, she herself is “notorious for wanting to introduce weird things into the music.” This mix of strict decision-making and playfulness places the group at a special middle ground between looseness and meticulously crafted, and all the better for it.

“I think we’ve all done a lot of growing since we started. We all did a lot of healing in writing these songs.”

Even within the oddities of some of the tracks, the immediacy and power of the group’s rock influence never fades. This isn’t snooty intellectualism—it’s kick-out-the-jams, belt-the-hooks music. “I’ve always wanted to incorporate heavier drums,” says Sigritz. “The heaviness comes from a literal, physical release.” To back up their personal, emotive lyrics, there needs to be music behind the group that fully honors the intensity with which they’re writing. “I’m not usually a loud person,” says Tut. “Playing this heavier music, I can get some anger out.” They’re right—meeting the trio, you’d never peg them as aggressive types, but the music produced teems with energy.

Starting the second week of March, Savage Daughters will begin recording a new six-track (subject to change) release, and the resulting music will showcase a new side of the band. Working for the first time with Stephen Cope from Provo’s officer jenny, the new songs represent a triumph for the band. “I think we’ve all done a lot of growing since we started,” says Tut. “We all did a lot of healing in writing these songs.” Sigritz adds that “this album will also show how we really mesh as musicians, and our personality types as well. I feel really proud of what we’re going to put out.” I was only able to hear preliminary demos of the new songs, but the increased clarity and tightness is easily imaginable, especially compared to their older work.

“Everybody’s supportive. We all go to each other’s shows, we all help out where we can—I love everybody.”

When asked what the title of the new album will be, the trio laughs and collectively agrees that they’ll probably decide this the day before the release. This anecdote perfectly illustrates just how in sync the group is. There’s an air of compassion, camaraderie and love between them, constantly reaffirming the talents and input of each other—urging others to chime in on the interview, expressing respect for musical choices. While two-thirds of this can be chalked up to the familial relationship between the Lopez twins, even greater credit goes to the underlying principles of the group. While the band’s name suggests anger and aggression, the personalities inside are thoughtful and genial. It might seem a bit of a ways away from the force of their music, but only through their interpersonal connection could they function this well.

Savage Daughters’ upcoming Localized show is not only a celebration of their forthcoming album, but also of the scene that supports them at large. Performing alongside their friends in Sonnets and Portal to the Goddamn Blood Dimension, the whole night is centered around the group’s involvement in the local music community. The members of Savage Daughters can frequently be found practicing and volunteering at The Underground, and past performances at events like Provo Pride or the Rock n’ Roll Camp for Girls have hooked them up with like-minded creatives, the likes of which serve as an inspiration for the band’s newer, heavier sound. “Everybody’s supportive,” says Tut. “We all go to each other’s shows, we all help out where we can—I love everybody.”

While Savage Daughters position themselves as a future-focused group, they do have past music that you can check out on their Bandcamp page. Be sure to make it out for their Localized performance on March 25, where they’ll be playing some of the songs off of their upcoming record, which is tentatively due this May.